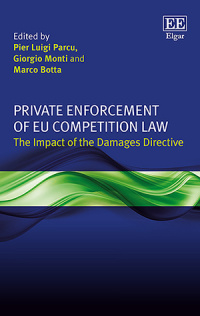 The Impact of the Damages Directive

More Information
Critical Acclaim
Contributors
Contents
More Information
During the past decade, the use of private enforcement within competition law has gradually increased throughout Europe but major differences still exist among Member States. By harmonizing a number of procedural rules, the implementation of the Damages Directive has established a level playing field among EU Member States. This book represents the first assessment of the implementation of the Damages Directive at the national level.

The contributors explore the topic from a cross-cutting perspective as well as via a set of country case studies. Each chapter focuses on a number of procedural aspects harmonized by the Directive, and analyses the impact of the Directive by taking into consideration the national jurisprudence and the existing legal framework at the national level. By using a comparative lens, this timely book thus provides an up-to-date account of the emerging trends in private enforcement of competition law in Europe.

Perceptive and engaging, this book will appeal to students and researchers in EU competition law and policy. Practitioners and national competition authorities will also find it informative and beneficial.
Critical Acclaim
‘The collection edited by Parcu, Monti and Botta is very timely in this context, since it aims to analyse many of the questions arising from the enactment and the implementation of the 2014 Directive. The collection gathers together the proceeds of the 2016 edition of the project “European Networking and Training for National Competition Enforcers” (ENTraNCE), a programme seeking to build capacity through training members of the judiciaries of the member states in the field of competition law.’
– Arianna Andreangeli, The Edinburgh Law Review

3. Liability issues not codified by the Damages Directive: how to fill such gaps?
Giorgio Monti

5. Private antitrust enforcement in England and Wales after the EU Damages Directive: Where are we heading?
Sebastian Peyer

6. Private enforcement of antitrust law in Belgium and the Netherlands – is there a race to attract antitrust damages actions?
Simon Vande Walle

7. Antitrust Damages Claims in Spain: Before and After the Damages Directive
Jerónimo Maillo

8. Private Antitrust Enforcement in France: Analysis of substantive and procedural challenges in light of the most recent case law
Silvia Solidoro

9. The Implementation of the Damages Directive in Czech Republic, Hungary, Poland and Slovakia: An Overview of Practical Issues and Challenges
Anna Renata Pisarkiewicz