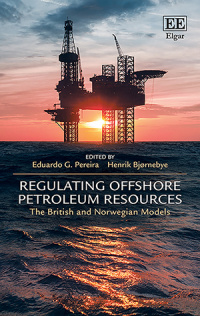 The British and Norwegian Models

9781785368905 Edward Elgar Publishing
Edited by Eduardo G. Pereira, Honorary Professor, Siberian Federal University, Russia and Associate Professor, The University of the West Indies and Henrik Bjørnebye, Scandinavian Institute of Maritime Law, University of Oslo, Norway
Publication Date: 2019 ISBN: 978 1 78536 890 5 Extent: 288 pp
Regulating Offshore Petroleum Resources examines the main regulatory characteristics of the Norwegian and the British models for petroleum exploration, production and supply. The authors explore to what extent these models are relevant for the design of regulatory models in countries with significant existing petroleum resources. The applicability of these regulatory models to countries with potential petroleum resources is also assessed.

More Information
Critical Acclaim
Contributors
Contents
More Information
Regulating Offshore Petroleum Resources makes a unique comparison between the main regulatory characteristics of the Norwegian and British models for petroleum exploration, production and supply. Leading scholars explore the extent to which these models are relevant for the design of regulatory models in countries with significant existing petroleum resources. The applicability of these regulatory models to countries with potential petroleum resources is also assessed.

Providing a profound understanding behind the evolution of the British and Norwegian petroleum regimes, this innovative book investigates why these countries followed different paths and analyses the resultant outcomes. Key features include examination of the historical evolution of relevant petroleum regimes, lessons learnt, and an interdisciplinary approach from a range of recognised experts.

This comprehensive book will be of great value to energy law scholars. Inspection of the ways in which these models can be applied to other countries will also be of interest to government officials and practitioners.
Critical Acclaim
‘This timely book, by leading experts in both jurisdictions, offers not just a fascinating retrospective on a vital half-century for the UK and Norway, but also a unique viewpoint from which to look forward to a time when each, in their own way, will need to respond to climate change even as they seek to continue to develop oil and gas resources. Understanding the legal foundations of the past will be vital to constructing a viable framework for the future.’
– John Paterson, University of Aberdeen, UK

‘Pereira and Bjørnebye have compiled an innovative and intriguing collection of chapters by different authors. This volume does not just compare the strategies taken by the governments of Norway and the United Kingdom in exploiting their petroleum endowments, but places them within the wider political, economic and societal contexts of these two countries. In this way, the book stands head and shoulders above most comparative studies in this field, and is vital reading for scholars, analysts and advisers in oil and gas regulation and taxation.’
– Philip Andrews-Speed, Energy Studies Institute, National University of Singapore

Natural Capital, Agriculture and the Law