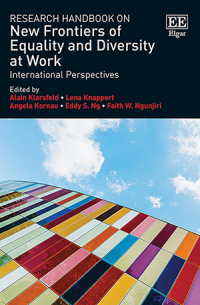 Research Handbook on New Frontiers of Equality and Diversity at Work

More Information
Contributors
Contents
More Information
Spanning five continents, this cutting-edge book provides a thorough international overview of equality, diversity and inclusion at work. Analysing the demographics of the workplace and the economic outcomes achieved by different segments of the population, it offers readers a better understanding of diverse work environments and how they are influenced by legislation and populations.

Grounded in theoretical and legal frameworks and supported by primary and secondary research, the Research Handbook highlights which dimensions of diversity and equality at work should be addressed. Chapters cover topics such as gender inequality and the underrepresentation of women in managerial positions, non-discrimination employment legislation, the labour participation of persons with disabilities and more. Focusing on previously under-researched countries across the world, from Bosnia and Herzegovina and Chile to Lebanon, Morocco, Singapore and several others from the Global South, this Research Handbook offers a fresh perspective on key issues within the workplace.