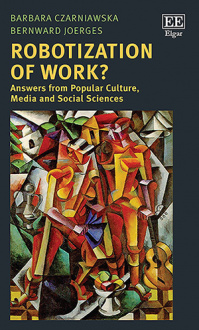 9781839100949 Edward Elgar Publishing
Barbara Czarniawska, Senior Professor of Management, GRI, School of Business, Economics and Law, University of Gothenburg, Sweden and Bernward Joerges, Professor Dr Emeritus, Institute of Sociology, Technical University Berlin and WZB, Berlin Social Science Center, Germany
Publication Date: 2020 ISBN: 978 1 83910 094 9 Extent: 144 pp
In this timely book, Barbara Czarniawska and Bernward Joerges examine the hopes and fears around work and job security inspired by automation, from the original coining of the term ‘robot’ to the present day media fascination. Have these hopes and fears changed or do they remain the same? This discerning book investigates whether these changes in perception correlate to actual changes taking place in the field of robotics.

More Information
Critical Acclaim
Contents
More Information
In this timely book, Barbara Czarniawska and Bernward Joerges examine the hopes and fears around work and job security inspired by automation, from the original coining of the term ‘robot’ to the present day media fascination. Have these hopes and fears changed or do they remain the same? This discerning book investigates whether these changes in perception correlate to actual changes taking place in the field of robotics.

Exploring several streams of popular culture, including ground-breaking science fiction novels and films, the impact of these globally renowned works on public opinion regarding robotics is assessed. Detailed media analysis identifies the frequency and complexity of common views that stem from the ideas found in both fiction and scientific research results disseminated by the news. Recent social science works dedicated to the study of robotziation are then reviewed, illustrating current and future debates surrounding the phenomenon of the ‘robot revolution’.

Robotization of Work? will be a key resource for students and scholars studying the organization of work, IT and digitalization, and cultural studies. It will also be of interest to anyone engaged with the concepts of artificial intelligence (AI) and robotization.

Critical Acclaim
‘Within the rapidly proliferating field of social studies of cybernetics this brilliant book stands out in several ways. It revisits the epistemology of autopoiesis by unearthing how popular culture, science fiction and cybernetics co-constitute each other since the 1920's. In doing so this book on imaginaries and technological developments ingeniously translates one of the key problems of knowing the world into a down-to-earth empirical investigation of the various literatures and films on the robotization of work. While most recent publications that similarly aim to address the core issues of cybernetics surrender to the urge of making prophecies, Czarniawska and Joerges consequentially remain astute, sober and razor-sharp and thereby provocatively interrupt a current trend. The elegant precision of the argument and the clarity of the language deployed makes this erudite and yet modest book come as a relief when one feels overwhelmed by the high-flown premonitions surrounding us.’
– Richard Rottenburg, University of the Witwatersrand, South Africa

‘In the midst of a full moral panic about robots and artificial intelligence, this wise and engaging book manages to avoid both the hype and hysteria by examining how popular culture – mainly science fiction movies and books – have portrayed robots and their impact on society. Brimming with new insights, the authors show how fiction has addressed many of the themes taken up in later scholarship. We imagine the worst but in the end our societies and institutions shape the actual technology we end up with.’
– Trevor J. Pinch, Cornell University, US
Contents
Contents: Introduction 1. Robot revolution? 2. Robotization and popular culture 3. Robots in popular culture 4. Robots in popular culture: A tentative taxonomy 5. Robotization in the media: 2014-2017 6. Robotization in social sciences 7. (Some) conclusions References Index