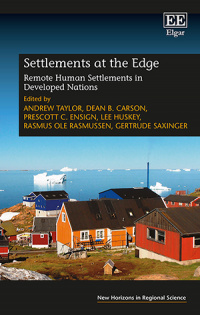 Settlements at the Edge

More Information
Critical Acclaim
Contributors
Contents
More Information
Settlements at the Edge examines the evolution, characteristics, functions and shifting economic basis of settlements in sparsely populated areas of developed nations. With a focus on demographic change, the book features theoretical and applied cases which explore the interface between demography, economy, well-being and the environment. This book offers a comprehensive and insightful knowledge base for understanding the role of population in shaping the development and histories of northern sparsely populated areas of developed nations including Alaska (USA), Australia, Canada, Greenland, Norway, Russia, Sweden, Finland and other nations with territories within the Arctic Circle.

In the past, many remote settlements were important bases for opening up vast areas for resource extraction, working as strategic centres and as national representations of the conquering of frontiers. With increased contemporary interest from governments, policy makers, multinational companies and other stakeholders, this book explores the importance of understanding relationships between settlement populations and the economy at the local level. It features international and expert contributors who present insightful case studies on the role of human geography – primarily population issues – in shaping the past, present and future of settlements in remote areas. They also provide analysis of opportunities and challenges for northern settlements and the effects of climate change, resource futures and tourism. A chapter on the issues of populating future space settlements highlights that many issues for settlement change and functions in isolated and remote spatial realms are universal.

This book will appeal to those interested in the past, present and future importance of settlements ‘at the edge’ of developed nations as well as to those working in policy and programme contexts. College students enrolled in courses such as demography, population studies, human studies, regional development, social policy and/or economics will find value in this book as well.

Critical Acclaim
‘This book, produced by six editors and more than 50 authors, studies and compares such settlements located in the developed world, for example in Australia, North America, the Nordic countries and the Arctic. This global approach is one of the key merits of the book, since research on “sparsely populated” and “remote” areas has traditionally focused on specific countries or parts of countries.’
– Heikki Eskelinen, Economic Record

‘This book is truly international in relevance and its authorship – with over 50 authors from at least 10 different countries. The topics covered are wide-ranging yet comprehensive and unified by an interesting descriptive theory (the 8 Ds of Beyond Periphery). The book’s contents, and the 8 Ds theory in particular, should be essential reading and provide rich food for thought (and possibly debate) for anyone researching the demographics or economics of remote communities, or more generally anyone grappling with the complexities of trying to contribute to sustainable futures for these communities.’
– Anthony Barnes, Charles Darwin University, Australia

‘Settlements at the Edge provides nuanced views of remote communities that are usually excluded from our dominant, urban focus on the world. For this quality alone, it is a much-needed addition to our resources on the remote and peripheral places of the globe that are still very much with us today.’
– Meg Sherval, Geographical Research

PART I SETTLEMENT HISTORIES AND THEIR REPRESENTATIONS
1 Introduction: settlements at the edge
Andrew Taylor

4 International migration and the changing nature of settlements at the edge
Kate Golebiowska, Tom Carter, Alicia Boyle and Andrew Taylor

5 Gender matters: the importance of gender to settlements at the edge of the Nordic Arctic
Lisbeth Harbo and Johanna Roto

10 Re-evolution of growth pole settlements in northern peripheries? Reflecting the emergence of an LNG hub in Northern Australia with experiences from Northern Norway
Sveinung Eikeland, Trond Nilsen and Andrew Taylor

17 Entrepreneurship and innovation at the edge: creating inducements for people and place
Prescott C. Ensign and Odd Jarl Borch