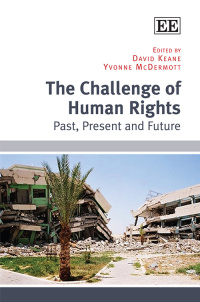 The Challenge of Human Rights

Past, Present and Future

9780857939005 Edward Elgar Publishing
Edited by David Keane, School of Law and Government, Dublin City University, Ireland and Yvonne McDermott, College of Law and Criminology, Swansea University, UK
Publication Date: 2012 ISBN: 978 0 85793 900 5 Extent: 352 pp
The Challenge of Human Rights takes a detailed and exploratory approach to topics across the field of human rights, and seeks to map a path for future research and policy development.

More Information
Critical Acclaim
Contributors
Contents
More Information
The Challenge of Human Rights takes a detailed and exploratory approach to topics across the field of human rights, and seeks to map a path for future research and policy development.

It examines contemporary approaches to established rights, such as the right to peace and the protection against double jeopardy, while also revisiting overlooked or forgotten rights and concepts such as slavery, apartheid and the right to resist, determining the optimal place for those rights in today’s world. The contributing authors outline lacunae in human rights law where rights could be established, from voting rights for under-18s to rights for the dead to cultural and intellectual property rights, and also apply completely new approaches to questions that have troubled human rights advocates for decades.

This innovative book will be essential reading for researchers and practitioners of human rights law, political scientists, historians, and others who have a general interest in the future trajectory of human rights.
Critical Acclaim
‘The editors, David Keane and Yvonne McDermott are to be congratulated on bringing together 18 distinguished contributors who offer a new insight into today’s human rights issues. It is an important contribution to the human rights debate which is set to continue as successive governments attempt to revise the 1998 legislation.
– Phillip Taylor and Elizabeth Taylor, The Barrister Magazine

‘This volume represents a genuine attempt to think beyond the realms of what exists, to reflect on ideas postulated in the past that could be of great salience in the future. It presents the reader with a key question: to what extent are the contemporary concepts of human rights and the systems that support them equipped to address the challenges of a changed world? By thinking through some of the ideas of the past, with a set of promising young scholars alongside more established names, readers will gain a sense of how human rights politics have shaped the current regime while also becoming attuned to the extent to which new directions and mechanisms can be forged in the future. Many of the individuals whose contributions are encompassed in this volume have strong links to the Irish Centre for Human Rights, at the National University of Ireland, Galway, an institution that has had a significant impact in its first decade of existence under the stewardship of Professor William A. Schabas. This volume celebrates the success of the institution by showcasing some of the talent it has generated, and is likely to be of avid interest to all who care about the future of human rights.’
– From the foreword by Joshua Castellino, Middlesex University, UK

2. Freedom from Fear and the Human Right to Peace
William A. Schabas

3. The Universality of War: Jus ad Bellum and the Right to Peace in Non-International Armed Conflicts
Kjell Anderson

4. UNESCO and the Right to Peace
David Keane

7. Forgotten Rights: Consequences of the Israeli Occupation of the Golan Heights
Ray Murphy

8. Forging a Convention for Crimes Against Humanity
Leila Nadya Sadat

9. Doublespeak and Double Standards: Does the Jurisprudence on Retrial Following Acquittal under International Criminal Law Spell the End of the Double Jeopardy Rule?
Yvonne McDermott

10. Third World Approaches to International Law and the Ghosts of Apartheid
John Reynolds

12. Between the Wars – the Refugee Convention of 1933: A Contemporary Analysis
Peter Fitzmaurice

14. Free and Fair Elections for Some? The Potential for Voting Rights for Under-18s
Aoife Daly