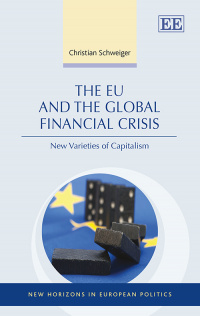 The EU and the Global Financial Crisis

More Information
Critical Acclaim
Contents
More Information
The EU And The Global Financial Crisis analyses the emerging new political economy of the EU Single Market in the wake of the 2008–2009 global financial crisis. The crisis has initiated a new wave of functionalist spillover towards deeper integration in the eurozone, which in effect divides the EU into multiple integrative cores.

Providing the first comprehensive examination of the emerging policy framework in the EU and the eurozone after the global financial crisis, this rigorous study applies a neofunctionalist approach to the analysis of the crisis implications by considering the emergence of the system of multiple cores in the EU as a result of the return of political spillover. It outlines the EU’s post-crisis varieties of capitalism and examines the effects of the financial crisis on selected key economies in the Single Market

This authoritative book offers a complete breakdown of the EU’s political economy in the wake of the global financial crisis and will therefore appeal to students of European politics, international political economy and European studies, as well as policy-makers and other stakeholders.

Critical Acclaim
‘The book by Christian Schweiger helps understand the processes currently taking place within the European Union, which result from the economic crisis. They concern the transformations within economic and social models taking place in the Member States. The uniqueness of this publication consists in the fact that the author confronted many of his opinions in the debates with researchers and experts from the states and regions he describes. Having read the book, one can only hope, but also be certain, that the European Union still has a future ahead.’
– Maciej Duszczyk - Institute of Social Policy, University of Warsaw, Poland

‘This stimulating and well-argued book examines the areas relevant within the Varieties of Capitalism (VoC) debate such as employment-related institutions and policies including the welfare state, and fiscal and monetary policies. Schweiger’s focus on the different VoC in Europe could not be timelier. Engaging in fundamental current European economic policy-related issues, this excellent book is a must read for scholars, policy advocates and students in the field.’
– Lothar Funk, University of Applied Sciences, Düsseldorf, Germany

‘This book is a fundamental study due to its richness in theoretical thinking and empirical material, and above all as a challenge to conventional interpretations of European integration.’
– José M. Magone, Global Policy

Contents
Contents: Part I: The EU Policy Frameworks under Stress 1. Varieties of Capitalism and the Crisis 2. From Deregulation Towards ‘Smart’ Regulation 3. Europe 2020 and the Eurozone Crisis: A New Functionalist Era? Part II: National Varieties of Economic and Social Models in the EU-27 4. The United Kingdom – Still the Liberal Model? 5. Germany: The Modell Deutschland between Stagnation and Reform 6. The New Crisis Paradigm: The GIIPS Countries 7. Central and Eastern Europe: From Transition Towards New Risk 8. The New Varieties of Capitalism and the Future of the European Social Model Index
Add to Wish List
eBook for individuals
978 1 78100 389 3
From £25.00
Click here for options
eBook for library purchase
978 1 78100 389 3
View sample chapter and check access on: