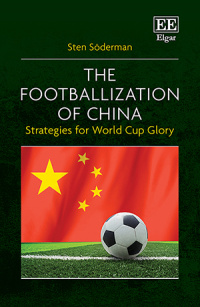 More Information
Critical Acclaim
More Information
In this unique book, Sten Söderman explores the prospect of China reaching its goal of hosting the 2050 World Cup. Söderman takes into consideration China’s size, resources, traditions and political system to ask what needs to be done and how.

The book assesses football in China today, discussing the main driving forces behind the development of football in China, and offering an analysis of its organizational structure, strengths, regulations and weaknesses. Taking a comparative approach, Söderman asks if China should simply adopt the European model of football, including values and skills, through imported players and coaches, or if it is better for China to forge its own path by building on its traditions and limiting the possibility of investing in foreign players, coaches and foreign football clubs. Looking to the future, the book outlines new models and tools to analyse the footballization of China. Söderman concludes with the argument that grassroots activity is the most critical factor in the development of football in China.

Examining if a strategic management mix will help China win the 2050 World Cup, this book will be a valuable resource for scholars and students of sport management and Asian business studies.

Critical Acclaim
‘Football in China has always been something of an enigma, especially over the last decade. Often under researched and misunderstood, Söderman's text lifts the veil on recent developments using an appropriately rigorous analytical approach. This is an important book that will appeal to researchers and fans alike.’
– Simon Chadwick, Skema Business School, France
Add to Wish List

Resilience and the Management of Nonprofit Organizations