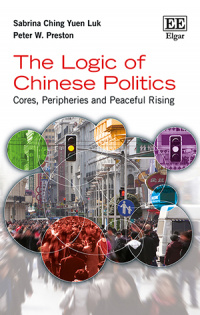 9781784711252 Edward Elgar Publishing
Sabrina Ching Yuen Luk, Assistant Professor of Public Policy and Global Affairs, Nanyang Technological University, Singapore and Peter W. Preston, Emeritus Professor of Political Sociology, University of Birmingham, UK
Publication Date: 2016 ISBN: 978 1 78471 125 2 Extent: 232 pp
Europe and China have a long intermingled history reaching back to the earliest phases of the shift to the modern world. In the twenty-first century Europe and China are rediscovering their interlinked histories and reestablishing relationships. One aspect of this process involves cutting through received images of China and this book presents a clear, concise, scholarly review of the logic of Chinese politics.