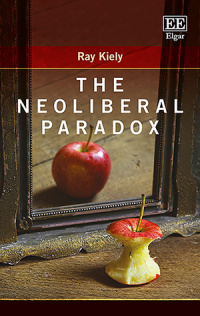 9781788114417 Edward Elgar Publishing
Ray Kiely, School of Politics and International Relations, Queen Mary, University of London, UK
Publication Date: 2018 ISBN: 978 1 78811 441 7 Extent: 448 pp
This ambitious work provides a history and critique of neoliberalism, both as a body of ideas and as a political practice. It is an original and compelling contribution to the neoliberalism debate.

The Neoliberal Paradox challenges the standard interpretations of neoliberalism that focus on limited government and free markets. Instead, Ray Kiely reveals the ways in which the neoliberal project is reliant on state power. The history and application of neoliberalism is discussed, from the Austrian and ordo-liberal schools in the 1930s and the Chicago School after 1945, through to developments such as the New Right and the third way, before finally considering the impacts of the financial crisis of 2008, the rise of Trump and Brexit. By exploring the full breadth of neoliberal theory and practice, in addition to the arguments of key thinkers, Kiely explores how neoliberalism has renewed itself in times of crises and turns his gaze towards the future.

This book will provide a stimulating read for academics and advanced students in the fields of politics, human geography and sociology in addition to those working in the public sector.
Critical Acclaim
‘Tired of neoliberalism? Think it’s over? Ray Kiely’s new book not only explains better than any other what neoliberalism is, where it came from and how it operates through what he calls the ‘inverted totalitarianism’ of the economic domination of politics, it brilliantly analyses how it has persisted through its own crisis over the decade since 2008, reinforced by the very bureaucratic state that it so paradoxically disparages. A truly indispensable book for our troubled times.’
– Leo Panitch, York University, Canada

‘What a great read. In a highly laudable feat of characteristically lucid and detailed writing, Ray Kiely takes us behind the scenes of contemporary neoliberalism to show us how the world came to be recast in this way. If you think you already know all there is to know about these dynamics, think again. There will be lots new here for even the most hardened historian of neoliberal thinking. A must-read.’
– Matthew Watson, University of Warwick, UK

‘This is a unique and uniquely valuable book. Ray Kiely provides a forensic examination of neoliberal thought between the early 20th century and Donald Trump. The thinkers who dreamed up the world in which we live today are exposed as never before, and the social, political and economic theories that have supported neoliberalism and informed neoliberal policy-making are explained in beautiful prose. This book is essential for anyone working on, around or against neoliberalism.’
– Alfredo Saad-Filho, SOAS University of London, UK