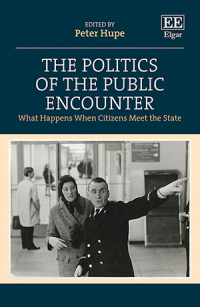 What Happens When Citizens Meet the State

9781800889323 Edward Elgar Publishing
Edited by Peter Hupe, Visiting Professor, KU Leuven Public Governance Institute, Belgium
Publication Date: 2022 ISBN: 978 1 80088 932 3 Extent: 396 pp
On the ground floor of government, citizens interact with teachers, medical staff, police officers and other professionals in public service. It is during these encounters that laws, public policies and professional guidelines gain further substance and form. In this insightful book, Peter Hupe brings together expert contributions from scholars across the globe to study the social mechanisms behind these public encounters.

This title contains one or more Open Access chapters.

More Information
Critical Acclaim
Contributors
Contents
More Information
On the ground floor of government, citizens interact with teachers, medical staff, police officers and other professionals in public service. It is during these encounters that laws, public policies and professional guidelines gain further substance and form. In this insightful book, Peter Hupe brings together expert contributions from scholars across the globe to study the social mechanisms behind these public encounters.

Integrating empirical case studies with cutting-edge theory, The Politics of the Public Encounter investigates what happens when citizens meet the state. Adopting a realist perspective, contributors examine the dichotomy between what is expected to happen and what actually happens at the street level of government. Chapters explore topics such as rule application and individual agency, the relationship between discretion and accountability, the consequences of digitalization and citizens’ impression management. Hupe concludes with a reflective essay and gives an account of what has been left aside, advancing a clear agenda for future research into the relationship between citizen and state.

Advanced students and scholars of law, political science, public administration, sociology and philosophy interested in the mechanisms behind the citizen/state encounter will benefit from the book’s multi-disciplinary approach. Its realist insights will also be an essential reference point for public service professionals.
Critical Acclaim
‘The “politics” in the title of this collection of essays understates its breadth. It is not just about the struggle for power when state and citizen meet, but highlights factors such as uncertainty absorption, impression management, risk work, co-creation and digitalization. Thereby scholarship on the topic gets a good boost ahead.’
– Charles Goodsell, Virginia Tech, US

‘What happens when citizens meet the state? This excellent book provides a breadth of theoretically and empirically informed approaches to that question from leading scholars in the field. Drawing on insights from different kinds of frontline encounters, it is a reminder of why the street-level continues to be at the centre of public policy scholarship.’
– Catherine Needham, University of Birmingham, UK

'In this thoughtful and wide-ranging book, Hupe and his colleagues take a fresh look at a fundamentally important puzzle: What happens when citizens meet government? They paint a rich portrait of politics and policy from the bottom up, not only about government’s political responsiveness but also its accountability to those who pay taxes and vote. The book is full of insights about public administration as well as the broader framework of the most important challenges facing government today.'
– Donald F. Kettl, Emeritus Professor, University of Maryland, US

‘This book is a unique synthesis of up-to-date contributions on the “public encounter” as a dynamic phenomenon, communication process and multi-dimensional object of scholarly inquiry. It provides empirically informed analyses and reflective essays about the citizen/state interaction from different disciplinary angles. The book is a must-read for all those interested in understanding “what happens when citizens meet the state.’
– Sabine Kuhlmann, University of Potsdam, Germany

PART I WHAT HAPPENS WHERE STATE AND CITIZEN MEET
3 The politics of street-level bureaucracy 40
B. Guy Peters
4 The public encounter and the role of citizens 57
Carola van Eijk and Trui Steen
5 Discretion and accountability: Notes on perspective and
avoidance 78
Keith Hawkins