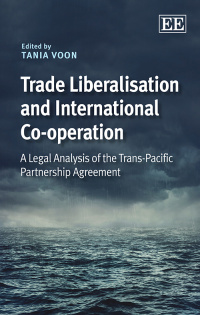 A Legal Analysis of the Trans-Pacific Partnership Agreement

9781782546771 Edward Elgar Publishing
Edited by Tania Voon, Professor and Associate Dean (Research), Melbourne Law School, University of Melbourne, Australia
Publication Date: 2013 ISBN: 978 1 78254 677 1 Extent: 296 pp
This book provides a detailed analysis of major legal and public policy issues arising from the Trans-Pacific Partnership Agreement (TPP) – a treaty that will dramatically change the landscape of international trade, with effects that will be felt on a global scale.

More Information
Critical Acclaim
Contributors
Contents
More Information
This book provides a detailed analysis of major legal and public policy issues arising from the Trans-Pacific Partnership Agreement (TPP) – a treaty that will dramatically change the landscape of international trade, with effects that will be felt on a global scale.

Experts from a range of backgrounds around the world provide perspectives on the significance and likely impact of the agreement, and in particular its implications for national regulatory autonomy. The chapters cover cross-cutting issues such as development, health and the environment, as well as more specific areas such as agriculture and services, and controversial questions of intellectual property, investment and dispute settlement under the agreement.

With an analytical focus on broad principles and enduring issues arising from the TPP, this informative book will appeal to academics, government advisors, NGOs, and students of law, economics, and international relations. Legal practitioners will also find much of interest in this book.
Critical Acclaim
‘Professor Tania Voon has assembled a stellar team of authors to produce one of the first collections analysing the Trans-Pacific Partnership Agreement (TPP) – the world’s most important and perhaps controversial contemporary trade agreement – from the legal perspective. Written and published before the conclusion of the negotiations, the collection provides preliminary analysis of the broader legal and policy issues at play during the negotiations. These issues will undoubtedly remain important following the conclusion of the negotiations. The snapshot provided by this collection will remain valuable long after the TPP comes into force.’
– Bryan Mercurio, The Chinese University of Hong Kong
Contributors
Contributors: W.-M. Choi, D. Elms, D. Kotlowitz, M. Lewis, J. Meltzer, A. Mitchell, J. Munro, R. Polanco, M. Rimmer, L. Trakman, T. Voon, K. Weatherall
Contents
Contents:

2. Coping with Proliferating Preferential Rules of Origin and the TPP’s Role in their Harmonisation
Won-Mog Choi

4. The TPP as a Case Study of Changing Dynamics for International Intellectual Property Negotiations
Kimberlee Weatherall

7. Services in the TPP: A Case Study of Telecommunications
Danny Kotlowitz and Tania Voon