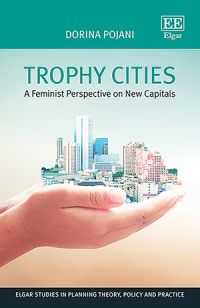 A feminist perspective on new capitals

9781839100437 Edward Elgar Publishing
Elgar Studies in Planning Theory, Policy and Practice
Dorina Pojani, School of Earth and Environmental Sciences, The University of Queensland, Australia
Publication Date: 2021 ISBN: 978 1 83910 043 7 Extent: 232 pp
Offering a fresh perspective, this timely book analyzes the socio-cultural and physical production of planned capital cities through the theoretical lens of feminism. Dorina Pojani evaluates the historical, spatial and symbolic manifestations of new capital cities, as well as the everyday experiences of those living there, to shed light on planning processes, outcomes and contemporary planning issues.

More Information
Critical Acclaim
Contents
More Information
Offering a fresh perspective, this timely book analyzes the socio-cultural and physical production of planned capital cities through the theoretical lens of feminism. Dorina Pojani evaluates the historical, spatial and symbolic manifestations of new capital cities, as well as the everyday experiences of those living there, to shed light on planning processes, outcomes and contemporary planning issues.

Chapters explore seven geographically, culturally and temporally diverse capital cities across Australia, India, Brazil, Nigeria, Kazakhstan, Myanmar and South Korea. Pojani argues that new capital cities have embodied patriarchal systems to govern their respective polities which has magnified problems in these cities. The book highlights how in new capitals, notions such as the state, the nation, urbanism, religion, the economy and even nature have been conceived of or treated in patriarchal terms, to the detriment of women and other disadvantaged groups.

This book will be an invigorating read for urban studies and planning scholars. The information about the processes of new city formation will also be of great use to urban planners.

Critical Acclaim
‘Feminism is not only about political representation or economic freedom, it is also about liberating our cities from only the pursuit of capital and making them the sites of play and community, about freeing all people in the way they occupy space and live out their daily lives, about giving dignity to the lived experience. Trophy Cities is a bold proposal for planning our cities around people and not money, for prioritizing joy over wealth. I'll be thinking about it for some time to come.’
– Jessa Crispin, Author of Why I Am Not a Feminist: A Feminist Manifesto

‘Pojani provides a highly original critique of planned capital cities through her use of a feminist perspective. She points to both the colonial inheritance that perseveres in post-colonial nations, even as the new capitals are intended to symbolize independence, and to the patriarchal inheritance within the indigenous culture. Well-written and clearly argued, Trophy Cities is a courageous look at how cities intended as trophies of liberation in fact are also instruments of oppression.’
– Susan S. Fainstein, Harvard Graduate School of Design, US; Author, The Just City and Editor, Gender and Planning
Contents
Contents: 1. Introduction: why a feminist perspective on new capital cities? 2. New capitals in the context of national history and international relations 3. The spatial manifestation of new capitals 4. The symbolic manifestation of new capitals 5. The capital as an everyday city 6. Conclusion: what would a feminist capital look like? Reference Index
Add to Wish List
eBook for individuals
978 1 83910 044 4
From £25.00
Click here for options
eBook for library purchase
978 1 83910 044 4
View sample chapter and check access on: