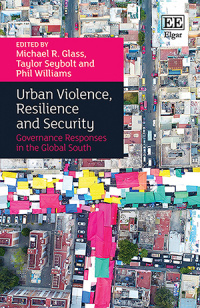 Governance Responses in the Global South

The empirically rich and conceptually grounded contributions of established and emerging scholars evaluate the current state and future trajectory of urban development. They also question common explanations of the drivers of violence in urban areas and also provide measured recommendations for improved policy and future governance. Chapters thoroughly examine the opportunities and hazards of focusing on resilience as the only method to improve security and identify governance and policy practices that can move beyond the rhetoric of resilience to evaluate diverse approaches to attaining human security in urban areas of the Global South.

This invigorating book will be an excellent resource for academic researchers interested in urban dynamics in the Global South as well as scholars embarking on geography, human security, political science and policy studies. Based on a set of original case studies, policymakers will also benefit from the questions and challenges to the conventional approaches to urban planning and governance that it raises.

Critical Acclaim
‘Urban Violence, Resilience and Security provides a unique intervention in the study of urban violence in the Global South. Challenging conventional accounts of urban violence modeled after cities in the Global North, contributors provide theoretically sophisticated and empirically-grounded case studies to highlight the myriad and geographically contingent forms of resilience and resistance. A must-read for scholars concerned with the urban condition of life and death in the Global South.’
– James Tyner, Kent State University, US

‘Urbanization is one of the most significant mega-trends of the modern era. It is also one of the most profoundly misunderstood. This knowledge gap is explored by Michael Glass, Taylor Seybolt and Phil Williams who examine the multiple causes, consequences and characteristics of global urban transformation. In their sweeping edited volume, contributors reflect on how the history, politics and economics of urbanization influences (and is influenced by) urban violence. A series of vivid case studies of under-studied cities from Africa, Asia and the Americas also reveal the complex relationships between urbanization, insecurity and resilience.’
– Robert Muggah, co-founder of the Igarape Institute and SecDev Group, Brazil
Contributors
Contributors: Enrique Desmond Arias, Roberto Briceño-Leon, Jon Coaffee, Savannah Cox, Daniel E. Esser, Vanda Felbab-Brown, Michael R. Glass, Kim Gounder, Brij Maharaj, Eduardo Moncada, Daniel Núñez, Taylor B. Seybolt, Phil Williams