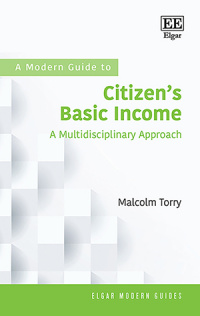 More Information
Critical Acclaim
Contents
More Information
Malcolm Torry explores Citizen’s Basic Income – an unconditional income for every individual – moving the reader from a basic understanding of the concept to an in-depth recognition of its wide-ranging implications. Torry examines debates around the desirability, feasibility and implementation of a Citizen’s Basic Income, and how this idea is becoming increasingly widespread.

This Modern Guide presents a comprehensive treatment of Citizen’s Basic Income, first offering insight into the language surrounding it, and moving through a number of key disciplinary perspectives, including sociology, politics, economics and law. Each chapter discusses an academic discipline, looking at relevant aspects of the debate to understand how the discipline enhances knowledge of Citizen’s Basic Income, and how discussion around the topic can contribute to the academic discipline.

Containing detailed case studies in each chapter, this book will be helpful to a wide variety of scholars and students wanting a broader knowledge of Citizen’s Basic Income. It will also be useful to policymakers who wish to engage in the debate on the potential benefits and drawbacks of a Citizen’s Basic Income.

Critical Acclaim
‘Malcolm Torry’s A Modern Guide to Citizen’s Basic Income is a welcome addition for any student of this concept. Torry maintains an objective balance in analysing the merits of the concept and he addresses many of the critiques levelled against it throughout the book. One of the truly refreshing aspects of this book is the heterodox treatment applied in attempting to understand and critique the idea of CBI.’
– Arya Pillai, International Review of Public Policy

‘Malcolm Torry is one of the most prolific, well-rounded, and knowledgeable researchers in the field of Basic Income. No one is better placed to write a multidisciplinary guide to the topic.’
– Karl Widerquist, Georgetown University, Qatar

‘Amid the recent explosion of scholarship on basic income Malcolm Torry has found a novel approach to exploring its theory and practice: an exploration of basic income through different disciplinary perspectives.’
– Almaz Zelleke, New York University Shanghai, China

‘As the idea of a Citizen's Basic Income continues to gain in prominence, Malcolm Torry's latest book brings a variety of lenses to bear upon the surrounding debate. He provides a valuable multi-disciplinary resource that will be of interest to a wide range of observers and commentators within that debate.’
– Hartley Dean, London School of Economics, UK

‘Malcolm Torry has been at the forefront of the British campaign for a universal basic income for more than 30 years. This new book explores how twelve academic disciplines – from ethics and psychology to history and law – shed light on the idea. For students and researchers looking to engage with the growing debate on UBI, Torry's book provides a very good place to start.’
– Peter Sloman, University of Cambridge, UK