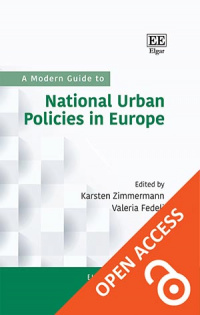 A Modern Guide to National Urban Policies in Europe

More Information
Critical Acclaim
Contributors
Contents
More Information
Written in a clear and concise style, this Modern Guide provides a timely overview and comparison of urban challenges and national urban policies in 13 European countries, addressing key issues such as housing, urban regeneration and climate change. A team of international contributors illustrates how gaps are emerging across Europe due to the significant shifts in urban programmes.

The book provides an in-depth analysis into how the European Union influences policies at a national level within its member states and how these are implemented in terms of scope and objectives. It explores how this results in fewer commonalities between countries and the gap between the rise of international urban agendas and variegated national urban policies, examining whether a more bespoke approach is better than the traditional ‘one size fits all’.

This insightful book will be an important read for researchers of urban studies and public policy as well as scholars with an interest in urban and regional sociology.

Critical Acclaim
‘A systematic comparison across sixteen countries obviously aims at a readership of scholars who are into comparative policy research, but also perhaps at policy and decision makers and their consultants who are looking into pending policy adjustments in a particular country. All of them would be grateful for the relatively concise and up-to-date comparative perspective provided by the book. It thus deserves effective reception by both scholars and practitioners who are looking for orientation in a globally urbanizing world, across the national boundaries.’
– H. Detlef Kammeier, TRIALOG

‘Karsten Zimmermann and Valeria Fedeli have co-created a landmark text on the changing role of national urban policies in Europe. Many leading scholars in the European Urban Research Association (EURA) contribute their insights and the book makes a major contribution to our understanding of the political struggles now shaping modern city politics.’
– Robin Hambleton, University of the West of England, UK

‘This interesting volume highlights the importance of considering cities as political actors embedded in national urban policies. A much-needed perspective to understand the degrees of freedom cities have in different European countries and their implications.’
– Yuri Kazepov, University of Vienna, Austria