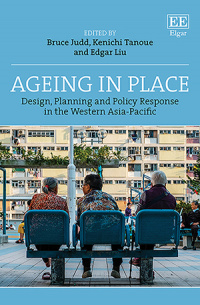 Design, Planning and Policy Response in the Western Asia-Pacific

More Information
Critical Acclaim
Contributors
Contents
More Information
Encouraging older people to age in place in their own homes is a common response internationally to the economic and social demands of population ageing. It is recognized that the nature of the built environment at various scales is critical to optimizing the social participation and wellbeing of older people and hence in facilitating ageing in place. This insightful book showcases a range of design, planning and policy responses to ageing populations from across the rapidly changing and dynamic Western Asia-Pacific region.

Ageing in Place considers diverse cultural, political and environmental contexts and responses to show that regional governments, industries and communities can gain, as well as offer, important insights from their international counterparts. With significant changes in caring, family dynamics and the supporting roles of governments in both Eastern and Western societies, the chapters demonstrate a clear and increasingly convergent preference for and promotion of ageing in place and the need for collaborative efforts to facilitate this through policy and practice.

The unique geographical focus and multi-disciplinary perspective of this book will greatly benefit academic researchers and students from a variety of backgrounds including architecture, urban planning, sociology and human geography. It also provides a unique entry point for practitioners seeking to understand the principles of design and practice for ageing in place in homes, neighbourhoods and care facilities.
Critical Acclaim
‘In bringing together a range of perspectives on ageing in place from across disciplines, Ageing In Place represents an insightful contribution to understandings of this phenomenon. The authors highlight that much of the English-language academic literature to date has a Eurocentric focus. Through its geographical focus on China, Hong Kong, Japan, Taiwan, Australia and New Zealand, this book marks a departure from this trend, and thus provides a valuable opportunity to draw comparisons and lessons from a broader multitude of local economic, political and cultural contexts in which this policy trend is variously embedded.’
– Hannah Holmes, International Journal of Housing Policy

‘This comprehensive book provides a unique offering to our understandings of ageing in place. It is particularly valuable in highlighting the differences and similarities in supporting and assisting ageing in place across countries with varying levels of ageing, different cultural norms and political systems but also in its approach from a detailed micro level analysis of housing design to the macro influences of policy. This is an important contribution to the scholarship on enabling older populations to age well.’
– Debbie Faulkner, University of South Australia

‘Tackling an important and growing challenge for countries throughout the world Ageing in Place provides a much-needed multi-country dialogue on ageing with dignity. Chapters grounded in empirical work and project examples investigate how China, Japan, Australia, and New Zealand are addressing the crucial connections between older people, their homes, and quality of life. This is a valuable and timely book.’
– Ann Forsyth, Harvard University, US

‘In this volume the editors have compiled some of the most important research on the housing situation of older people in the Western Asia-Pacific region. In particular, the term “ageing in place” is discussed, a condition much favoured by governments across the globe. With its focus on population ageing and the built environment in this geographical region the book is a most welcome contribution to the literature in this field of research.’
– Marianne Abramsson, Stockholm University, Sweden

PART I DESIGN
2 Housing typology and ageing in place in Australia 14
Bruce Judd
3 Ageing in place: Japan struggles toward its realization 34
Satoshi Kose
4 Community opposition to embedded facilities for the elderly in Chinese
urban communities 39
Zhang Song and Lei Jing-Wen
5 A field survey on the environmental characteristics of day care centres
for the demented elderly in Taiwan 48
Hwang Yao-Rong
6 Preferable home environment for the independent elderly to prevent
falls and maintain activities of daily living 60
Satoshi Muraki