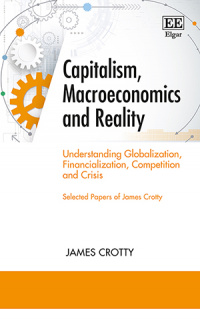 9781784719012 Edward Elgar Publishing
James Crotty, Emeritus Professor of Economics and Sheridan Scholar, Political Economy Research Institute, University of Massachusetts, Amherst, US
Publication Date: 2017 ISBN: 978 1 78471 901 2 Extent: 448 pp
The essays comprising this collection analyze the deep flaws in the methodological foundation of mainstream economic theory, and explain how these flaws make mainstream economics more ideology than sound social science. James Crotty develops alternative theories built on realistic assumptions that can explain most of the disastrous economic and financial developments of the past four decades. His work contributes to the collective creation of a solid theoretical foundation on which to build an understanding of the ‘laws of motion’ of capitalism in the post WWII era.