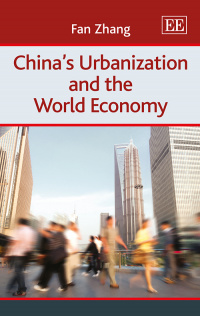 China’s Urbanization and the World Economy

Urbanization has become a new driving force in China’s development. Through China's urbanization process, China’s role in the world economy will change from the world’s major workshop to one of the world’s central markets. The increase in demand triggered by urbanization has created a tremendous impact in the international market, changing China’s international trade patterns, foreign investment and exchange rate. The success of China’s urbanization depends on a group of intertwined economic and political reforms, the vision and determinedness of the leadership, cooperation and opposition of the local government, and the attitude of society. This book focuses on the logic and contradictions of China’s urbanization and its future, its impact on the world economy, and the policy tradeoffs the Chinese leadership face.

Economists, policymakers, academics and students interested in urban policy, international studies, Asian studies and the impact of China’s urbanization on the world economy will all have much to learn in this groundbreaking book.

Critical Acclaim
‘This book provides a fascinating perspective on why China will very likely continue to play a major role in world export at a time when it is losing its comparative advantage in labor-intensive manufacturing products as a result of rapidly rising labor cost and appreciation of its currency—the secret lies in the fact that China (as the most populous nation) can benefit from increasing returns to scale. However, the author also clearly outlines the enormous challenges ahead of China: to urbanize and integrate most of its rural population as a precondition for China to explore its potential advantage in scale economy through agglomeration effects.’
– Guanzhong James Wen, Trinity College, US and Shanghai University of Finance and Economics, China

‘This is an original reading by a Chinese economist on the grand topic of China’s urbanization. Through gathering a vast amount of raw materials available in Chinese, the book deliberately maintains its indigenous flavour and introduces rich and timely information to the outside world, on topical issues such as household registration (Hukou) reform, fairness of land acquisition, housing price control, forced demolition, urban poverty, traffic congestion and many other topics. The attempt to consider the implications for the world economy, especially on issues such as energy and material consumption, is extremely valuable and much needed.’
– Fulong Wu, University College London, UK
Contents
Contents: Preface Prologue Part I: China’s Urbanization 1. China’s Urbanization: History and Facts 2. The Road Map and Logic of China’s Urbanization 3. Industrialization and Urban Development 4. Labor Migration 5. Land and Local Government Finance 6. Infrastructure and Housing Construction 7. Social Aspects of Urbanization 8. Other Problems with Urbanization 9. The System of the Cities Part II: China’s Impacts on the World Market 10. Overall Estimates and Assumptions 11. Raw Materials and Capital Goods 12. Consumer Market 13. Relocation of Factors: Labor and Capital 14. Macroeconomic Impacts Part III: Choices of China and the World 15. China’s Choices 16. The Choices of the Rest of the World Conclusions Reference Index
Add to Wish List
eBook for individuals
978 1 78100 188 2
From $40.00
Click here for options
eBook for library purchase
978 1 78100 188 2
View sample chapter and check access on: