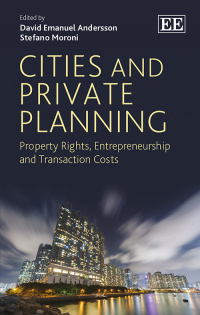 Urban planning is often construed only as a form of public planning. This misinterpretation is revealed through an empirical focus on how cities have been planned in the past and how the capacity of private actors will shape planning in the future. Private planning is responsible for most small-scale infill developments, ranging from single-family housing to hotels. However, examples of non-governmental actors that plan larger areas, such as homeowners' associations in the United States and private cities in India, are becoming manifest. Private urban planners are guided by price signals to supply infrastructure and regulations that make land more valuable. Using analytical tools from theoretical traditions such as Austrian and new institutional economics, the contributors to this book eschew the mainstream assumptions that underlie much of the critique of profit-seeking entrepreneurship among urban planners, sociologists and geographers.

This volume will be invaluable for urban planners. Economists in a variety of fields will also be interested in the diverse application of economic theory, including applied urban economists, Austrian economists, new institutional economists and public choice economists.

Critical Acclaim
‘This is a wonderfully subversive book that should be essential reading for all students of urban planning. Cities evolve under the influence of multiple individual land development plans. Coordination between these can happen to varying degrees, at various spatial scales, under the leadership of different organisations and through multiple mechanisms. Planning education and practice has by and large missed this point for over half a century. We need a new knowledge-base for city-shaping in the 21st century and this book lays some of the essential foundations.’
– Chris Webster, University of Hong Kong

‘Not so very long ago the notion of private city planning would have been of interest to only a few die-hard libertarians. This book shows why no serious analysis of the forces shaping cities across the world today can neglect the role of private planning and the potential it might have to deliver more live-able urban places.’
– Mark Pennington, King’s College, University of London, UK

‘Overall, the volume is well deserving of the attention of those interested in non-market decision making, especially political decision making. . . Ultimately the volume is accessible, and undoubtedly will be valuable, both to those engaging the subject for the ﬁrst time, and those who are already familiar with the literature. Those working in the area of private governance will ﬁnd these essays valuable as a foundation upon which to conduct future research.’
– Alexander William Salter, Public Choice

3. Towards a General Theory of Contractual Communities: Neither Necessarily Gated, nor a Form of Privatization
Stefano Moroni

9. Houston’s Land-Use Regime: A Model for the Nation
Randal O’Toole

11. The Rise and Fall of Growth Management in Florida
Randall G. Holcombe

12. The Public Planning of Private Planning: An Analysis of Controlled Spontaneity in the Netherlands
Edwin Buitelaar, Maaike Galle and Niels Sorel

Benchmarking and Regulation in Transport