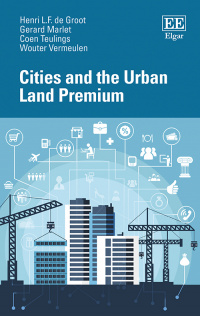 Cities and the Urban Land Premium

9781784717438 Edward Elgar Publishing
Henri L.F. de Groot, Professor, VU University Amsterdam, Tinbergen Institute and Ecorys NEI, Gerard Marlet, Atlas voor Gemeenten, Utrecht University School of Economics and University of Groningen, the Netherlands, Coen Teulings, Professor, University of Cambridge, UK, University of Amsterdam and Tinbergen Institute, the Netherlands and Wouter Vermeulen, SEO Amsterdam Economics, the Netherlands
Publication Date: 2015 ISBN: 978 1 78471 743 8 Extent: 144 pp
After a long period of suburbanisation, cities have been in vogue again since the 1980s. But why are people prepared to spend far more money on a small house in the city than on a large house in the countryside – and why doesn't this apply to all cities? This book shows that the appeal of the city in the 21st century is not only determined by the production side of the economy, but also by the consumption side: its array of shops, cultural activities and, for example, an historic city centre. All these factors not only translate into land prices that are worlds apart but, in terms of production, into different wages for urban and rural citizens. This book maps out these differences.

More Information
Critical Acclaim
Contributors
Contents
More Information
After a long period of suburbanization, cities have been in vogue again since the 1980s. But why are people prepared to spend far more money on a small house in the city centre than on a large house in the countryside – and why doesn't this apply to all cities? The authors of this book argue that the appeal of the city in the 21st century is not only determined by the production side of the economy, but also by the consumption side: its array of shops, cultural activities and, for example, an historic city centre.

All these factors translate into a huge disparity in land prices as well as different wages for urban and rural citizens. This study maps out these variations, with an economic approach to spatial planning and an emphasis on land rents as a basis for cost-benefit analysis. The use of land prices as a reflection of the appreciation for urban amenities is an ideal measurement tool in the cost–benefit analyses for local investments and spatial planning policies, and sheds new light on the organisation of public administration.

This accessible book will be of interest to geographers, economists and social scientists, as well as policymakers involved in urban planning, seeking an in-depth understanding of land prices and the increasing importance of cities in the 21st century.

Critical Acclaim
‘The book is easy to read and highly recommended for anyone interested in understanding the economic aspects of recent urban developments.’
– Springer Science+Business Media B.V.

‘This is an excellent book built around an analysis of uniquely detailed datasets and providing very clear empirical insights to a range of important analytical questions in urban economics. The relevance of the book goes well beyond Europe to the wider international arena and exposition is so clear that the book serves a dual purpose - it can be used both to throw light on the empirics of key issues while at the same time it can also serve as a teaching book. Highly recommended.’
– Philip McCann, University of Groningen, the Netherlands

‘Cities are back and so is urban economics. This book documents and explains the resurgence of cities in general and Dutch cities in particular: this is refreshing given the almost total concentration of recent analysis on the US and to a lesser extent the UK. Not only is there a clear account of what agglomeration economies mean and how they reveal themselves in Dutch cities, particularly Amsterdam, but there is a proper emphasis on the consumption aspects of cities. People like them, they like living in them and they benefit from that. It is not all about cities making workers more productive. Another excellent feature of this book is that it gives proper emphasis to land markets and how the good things cities generate get reflected in the price of land and housing. Nor is it all about abstract models and the private sector – there is proper emphasis on the importance of good urban governance and how it can be effectively paid for. The book is accessible and illustrated with great diagrams and maps. It is a good read for all interested in modern urban development.’
– Paul C. Cheshire, London School of Economics and Political Science, UK

‘Cities and the Urban Premium advances our understanding of urban phenomena through the detailed quantitative description of the characteristics and evolution of the urban system in the Netherlands. Its scope and use of the latest theories and ideas in urban economics, effectively translated to the practical concerns of policy makers in the specific context of the Netherlands, make it a unique book. One that should be an invaluable companion of everyone involved in urban policy.’
– Esteban Rossi-Hansberg, Princeton University, US

‘De Groot, Marlet, Teulings and Vermeulen have written a compelling book on the economics of cities, land values, and their interconnection within a greater urban system. As their title promises, the authors keep land values at the forefront: arguably, the range between urban and agricultural values – which in the Netherlands varies by a factor of 200 – is the pecuniary marker of ‘civilization’, taken literally. Land prices encapsulate the value of location. The urban land premium arises from the tremendous opportunities that cities offer.’
– Papers in Regional Science
Contributors


Contents
Contents: 1. The Resurrection of the City 2. Land Underneath the City 3. The Dynamics of the Dutch System of Cities 4. The Production City 5. The Consumer City 6. Land Prices and Governmental Policy 7. Agglomeration Benefits and Spatial Planning Policy 8. Social Cost-benefit Analysis of an Inner City Transformation Project 9. Agenda for the Future Index
Add to Wish List
eBook for individuals
978 1 78471 744 5
From $40.00
Click here for options
eBook for library purchase
978 1 78471 744 5
View sample chapter and check access on: