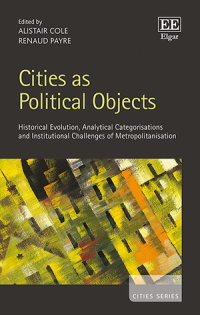 More Information
Critical Acclaim
Contributors
Contents
More Information
Focusing on the city’s role as the nexus for new forms of relationships between politics, economics and society, this fascinating book views the city as a political phenomena. Its chapters unravel the city’s plural histories, contested political, legal and administrative boundaries, and its policy-making capacity in the context of multi-level and market pressures.

Accommodating numerous approaches drawn from a variety of European countries and metropolitan settings, contributors make extensive use of case studies in order to both interpret the variety of processes of metropolitanisation at work over the past few decades and provide insight into the various conceptual and theoretical approaches that the social sciences – and the political sciences in particular – have adopted to explain this phenomenon. This book both studies cities that have developed their own forms of governance, with tailored institutions, a large policy-making capability and sometimes a new democratic legitimacy, yet also offers an alternative understanding of cities as objects of public policy; the intended targets of the development of European-level or national urban policies.

Students of comparative politics, urban studies and European studies will welcome the mix of conceptual, comparative and case study based approaches that this book encompasses. Practitioners will also benefit from the chance to avail themselves of cutting edge research.

Critical Acclaim
‘Cities are back as significant political-administrative units – only now as metropolises. Rather than simply a mechanical effect of the exigencies of economic globalisation, this book convincingly demonstrates that an array of active political actors are involved in energising the trend. It is political praxis not economic structure that provides the key to understanding the efflorescence of urban governance today. The fact that there is much variation across cities in the extent and effectiveness of new models of governance suggests how much one-size-fits-all economic determinism misses the point,’
– John Agnew, Distinguished Professor of Geography, University of California, Los Angeles, US
Contributors
Contributors: F. Artioli, S. Cadiou, J. Caillosse, J. Carpenter, A. Cole, S. Couperus, A. Dowling, D. Galimberti, I. Gordon, H. Heinelt, M. Huré, C. Parnet, R. Payre, C. Pin, P. Prat, K. Zimmermann

3. The Greater Paris Debate: The French State and its Capital region
Pauline Prat

4. A Tale of Two Cities: Madrid and Barcelona in Spain
Andrew Dowling

PART II CITIES AS POLITICAL AND ADMINISTRATIVE CATEGORIES
5. The City as a Legal Category and legal archive
Jacques Caillosse

6. The rise and demise of neighbourhood democracy: decentralising the urban polity in Rotterdam since 1940
Stefan Couperus

8. Cities in the Multi-level System of German Federalism
Hubert Heinelt and Karsten Zimmermann

9. The Métropole as a Contested and Partisan Institution: Reflections on the Case of the French City of Nice.
Stéphane Cadiou

11. The Metropolis and the Market: Political Rescaling Through Public-private Bike-sharing Policy in Brussels
Maxime Huré

12. Two Faces of the City: Varieties of metropolitanisation in Lyons and Marseilles
Christophe Parnet