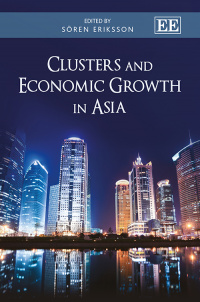 Clusters and Economic Growth in Asia

The authors study a number of important issues including the role of information and communication technology in economic growth, an emerging biomedical cluster in South Korea, an industrial agglomeration of Taiwanese electronics firms in China, and different sectorial and regional growth models in China. They also investigate the increasing relevance of cluster policies and the need to understand them in the context of the institutional and structural transition of newly industrializing East Asian economies. The book moves on to study the technology intensity of FDI in Vietnam and the implications for economic growth and emerging clusters, as well as the origin and characteristics of foreign technology transfer in a Chinese aircraft industry cluster.

Clusters and Economic Growth in Asia will greatly appeal to academics, researchers, politicians, policy planners and industrial specialists, as well as those with a specific interest in clusters and economic growth in Asian economies.
Critical Acclaim
‘The book is thus a useful addition to the large and growing literature involving industrial agglomeration and clustering in the dynamic geographic region of East Asia, particularly in an international setting. . . the collection is of value.’
– Srikanta Chatterjee, World Economics Association Newsletter

4. The Rise of the Biomedical Cluster in Wonju, Korea
Jun Koo and Jongmin Choi

7. The Aircraft Industry as a Tool for Economic and Industrial Development – The Case of Indonesia
Sören Eriksson