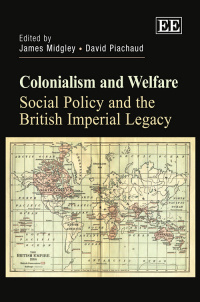 9780857932433 Edward Elgar Publishing
Edited by James Midgley, Professor of the Graduate School, University of California, Berkeley, US and David Piachaud, Professor of Social Policy, London School of Economics, London, UK
Publication Date: 2012 ISBN: 978 0 85793 243 3 Extent: 224 pp
The British Empire covered three centuries, five continents and one-quarter of the world’s population. Its legacy continues, shaping the societies and welfare policies of much of the modern world. In this book, for the first time, this legacy is explored and analysed.

More Information
Critical Acclaim
Contributors
Contents
More Information
The British Empire covered three centuries, five continents and one-quarter of the world’s population. Its legacy continues, shaping the societies and welfare policies of much of the modern world. In this book, for the first time, this legacy is explored and analysed.

Colonialism and Welfare reveals that social welfare policies, often discriminatory and challenging to those colonised, were introduced and imposed by the ‘mother country.’ It highlights that there was great diversity in rationales and impacts across the empire, but past developments had a major impact on the development of much of the world’s population. Contributions from every continent explore both the diversity and the common themes in the imperial experience. They examine the legacy of colonial welfare – a subject largely neglected by both historians of empire and social policy analysts.

‘Offering a rich comparative analysis of welfare policies across modern Commonwealth nations, the volume demonstrates how the creation of both processes and subjects of colonial domination historically unfolded as a ‘ugly affair’’
Eleanor Conlin Casella, Journal of Social Policy

‘The uniqueness of this book is that the contributing authors, who are sociologists and social policy analysts, examine the neglected social policies promoted by the British imperial system, which have drawn little or no attention in the literature but affected the lives of millions of inhabitants of colonised societies. . . makes an important contribution to the discussion of the British imperial legacy and is recommended for policy analysts, historians, and anyone interested in comparative politics.’
– Kwame Badu Antwi-Boasiako, International Social Science Review

‘The book is cohesive and well articulated, a great feat for pulling together a number of authors from different disciplines. Each chapter illuminates the complexities and the contradictions inherent in the legacy of colonialism on social welfare policy. Indeed, one can only hope that this book becomes the first in a series of books examining the legacy of colonialism, not only of the British Empire, but also the French, Dutch, and American Empires. . . While this book will certainly appeal to social work researchers, practitioners and students engaged in international policy and practice, it holds value for those in other fields of social work.’
– Melinda Williams Moore, Journal of Sociology and Social Welfare
Contributors
Contributors: J. Harrison, N. Jayaram, E. Kaseke, R. Kattumuri, J. Lewis, J. Midgley, L. Patel, D. Piachaud, P. Smyth, K.-l. Tang
Contents
Contents:

PART I: OVERVIEW
1. The British Empire and World History: Welfare Imperialism and ‘Soft’ Power in the Rise and Fall of Colonial Rule
Joanna Lewis

10. Higher Education in India: The Legacy of Colonialism
Ruth Kattumuri