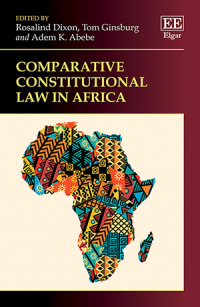 More Information
Critical Acclaim
Contributors
Contents
More Information
This timely book is a crucial resource on the rich diversity of African constitutional law, making a significant contribution to the increasingly important field of comparative constitutional law from a historically understudied region. Offering an examination of substantive topics from multiple jurisdictions, it emphasises issues of local importance while also providing varied perspectives on common challenges across the continent.

Divided into four thematic parts, chapters cover a wide array of subjects including a variety of constitutional rights, the regulation of political parties, constitutional formation and amendments, and the influence of regional organizations. Featuring contributions both from scholars from Africa and from outside the region, the book elucidates Africa’s place within the growing discourse of comparative constitutional law.

Opening up new cases and vistas of study, this book will be a vital read for all scholars and students of comparative constitutional law. It will also be of interest to practitioners and policymakers working on constitutional issues, as well as those interested in African politics and constitutional development more broadly.

Critical Acclaim
‘Dixon, Ginsburg, and Abebe have built a magnificent team of eminent scholars to guide readers through the largely uncharted terrain of African constitutionalism. Contextual, innovative, timely and brilliant, Comparative Constitutional Law in Africa is a must-read for constitutionalists and a much-needed book on an understudied yet immensely important region of the world.’
– Richard Albert, The University of Texas at Austin, US