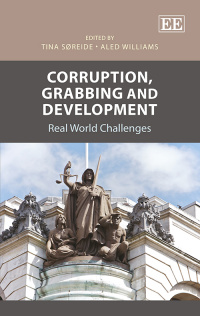 9781782544401 Edward Elgar Publishing
Edited by Tina Søreide, Department of Accounting, Auditing and Law, Norwegian School of Economics (NHH) and Aled Williams, U4 Anti-Corruption Resource Centre, Chr. Michelsen Institute (CMI), Bergen, Norway
Publication Date: 2014 ISBN: 978 1 78254 440 1 Extent: 232 pp
All societies develop their own norms about what is fair behaviour and what is not. Violations of these norms, including acts of corruption, can collectively be described as forms of ‘grabbing’. This unique volume addresses how grabbing hinders development at the sector level and in state administration. The contributors – researchers and practitioners who work on the ground in developing countries – present empirical data on the mechanisms at play and describe different types of unethical practices.

More Information
Critical Acclaim
Contributors
Contents
More Information
All societies develop their own norms about what is fair behaviour and what is not. Violations of these norms, including acts of corruption, can collectively be described as forms of ‘grabbing’. This unique volume addresses how grabbing hinders development at the sector level and in state administration. The contributors – researchers and practitioners who work on the ground in developing countries – present empirical data on the mechanisms at play and describe different types of unethical practices.

The book's sixteen case studies explore why certain practices constitute forms of grabbing, what implications they have for the achievement of development goals, and how policy options should take the characteristics of grabbing into account. A broad range of sectors are covered, including extractive industries, construction, ports, utilities, finance, health, pharmaceuticals and education. The authors discuss political checks and balances, democratic elections and the law enforcement system, as well as the government’s role in the allocation of land and as a development partner in other countries.

The volume’s original approach makes it a valuable resource for researchers and students interested in development, economics, governance and corruption. Development aid practitioners, as well as politicians and public officials in developing countries, will find it a useful aid in their work.
Critical Acclaim
‘Tina Soreide and Aled Williams bring both academic depth and real world experience to this volume. . . .The editors perform outstandingly in introducing the collection, organizing the articles usefully, and orienting the reader to the cohesive whole. In fact, the quality of the Introduction is exceptional, a must-read, for content and style.’
– Linda Quest, International Social Science Review

‘The content in each chapter is compelling and provides new perspectives for tourism researchers who attempt to specifically focus on tourism competitiveness. In addition, as noted by the editors, the book can also be considered as an essential source of reference for policy-makers.’
– Metin Kozak, Journal of Tourism and Cultural Change

‘This is a brave publication. I am not aware of a comparable, eclectic, investigative, in-depth book on this topic. Tina Soreide and Aled WIlliams present an informative, indeed refreshing collection of sixteen case studies from all over the world.’
– Fabian Thiel, Erdkunde

‘Informative and refreshing, these short studies from around the world provide fertile ground for discussion, analysis and positive ways forward. In this book, corrupt practices from around the world are examined by experienced practitioners and researchers who shed light on various forms of corruption.’
– Adam Graycar, Australian National University

‘“Grabbing”, as defined by Søreide and Williams, is about more than corruption. It also includes attempts to benefit unduly at the expense of the state, including overly zealous efforts to limit taxes and regulatory costs, and to influence political choices. This fascinating collection of real-world cases, presented crisply and clearly, is organized by sector, country, political influence and international aid. It will give reformers a context for their own efforts and will help analysts trace general patterns and common pathologies.’
– Susan Rose-Ackerman, Yale University, US

PART I: GRABBING EXPLAINED BY CHARACTERISTICS OF A SECTOR OR STATE FUNCTION
1. Corruption and Collusion in Construction: A View from the Industry
Jill Wells

PART II: GRABBING AT THE LEVEL OF SECTOR AND STATE FUNCTIONS IN A COUNTRY CONTEXT
6. Grabbing by Strangers: Crime and Policing in Kenya
Jens Andvig and Tiberius Barasa

8. Using Salaries as a Deterrent to Informal Payments in the Health Sector
Ida Lindkvist

11. ‘Pay Up and Off You Go!’ Buying Political Positions in Bangladesh
Inge Amundsen

13. ‘Grabbing’ an Election: Abuse of State Resources in the 2011 Elections in Uganda
Svein-Erik Helle and Lise Rakner

16. When Per Diems Take Over: Training and Travel as Extra Pay
Ingvild Aagedal Skage, Tina Søreide and Arne Tostensen