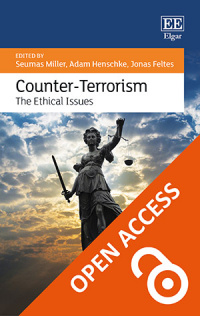 More Information
Critical Acclaim
Contributors
Contents
More Information
This insightful book provides an analysis of the central ethical issues that have arisen in combatting global terrorism and, in particular, jihadist terrorist groups, notably Al Qaeda, Islamic State and their affiliates. Chapters explore the theoretical problems that arise in relation to terrorism, such as the definition of terrorism and the concept of collective responsibility, and consider specific ethical issues in counter-terrorism.

The book discusses a range of key topics including targeted killing, enhanced interrogation of terrorists, preventive detention, freedom of expression and terrorist content on social media, bulk metadata collection and responding to terrorist attacks that use weapons of mass destruction. It also explores ethical issues that have often been neglected, such as psychological warfare and stings. Taking a practical approach, the book offers recommendations for resolving these ethical problems in counter-terrorism.

Integrating philosophical and legal analysis with empirical evidence, this book will be critical reading for scholars and students of human rights, international relations and terrorism and security law. Its use of specific examples of terrorist organisations, tactics and outcomes will also be valuable for policy-makers in the field.

Critical Acclaim
‘Counter-Terrorism: The Ethical Issues provides a thorough and systematic introduction into the ethics of counter-terrorism. Drawing on leading experts in the field and aimed at a wider audience, it clarifies the philosophical foundations, covers widely discussed special topics, and expands the debate to so far understudied but nonetheless important legal and moral issues. Combining theoretical and analytical depth with a simultaneous realistic focus on practice, it offers excellent politically relevant scholarship on a pressing issue of our times.’
– Uwe Steinhoff, University of Hong Kong

‘The authors have produced a very welcome and balanced compilation of ideas on how to counter terrorism while taking into account the norms and values of liberal societies. Confronted with European, American and Australian perspectives both practitioners and students of counter-terrorism policies will find useful yardsticks and judgment tools with the help of illuminative concepts such as the web of prevention, standing intentions of terrorists, narrative dominance, the distinction between speech and public communication, whereby ethics is not used to condemn the practitioners but to show them opportunities that will help them to professionalize their approaches.’
– Bob de Graaff, Utrecht University, the Netherlands
Contributors
Contributors include: M.B. DeRosa, J. Feltes, A. Henschke, S. Miller, M. Regan, S. Robbins, M. Robillard, M. Skerker, L.J. West, A.L. White
Contents
Contents:

Handbook on Austerity, Populism and the Welfare State