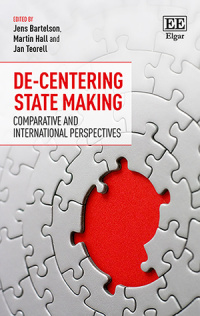 9781788112987 Edward Elgar Publishing
Edited by Jens Bartelson, Martin Hall and Jan Teorell, Department of Political Science, Lund University, Sweden
Publication Date: 2018 ISBN: 978 1 78811 298 7 Extent: 256 pp
Bridging the gap between international relations and comparative politics, this book transposes Eurocentric theories and narratives of state-making to new historical and geographical contexts in order to probe their scope conditions. In doing this, the authors question received explanations of the historical origins and geographical limits of state-making, questioning the unilinear view of the emergence of the modern state and the international system. Theoretically and methodologically eclectic, the volume explores a range of empirical cases not often discussed in the literature.

More Information
Critical Acclaim
Contributors
Contents
More Information
State making has long been regarded as a European development, both historically and geographically. In this innovative book, the authors add fresh insights into the nature and causes of state making by de-centering this Eurocentric viewpoint through simultaneous changes of conceptual, theoretical and empirical focus.

De-Centering State Making combines knowledge from comparative politics and international relations, creating a more holistic perspective that moves away from the widespread idea that state making and war are intrinsically linked. The book uses both qualitative and quantitative methods to examine historical and contemporary cases of state making as well as non-European ones, providing an in-depth analysis of the nature and causes of state making, historically as well as in a modern, global environment.

This timely book is an invaluable read for international relations and comparative politics scholars. It will also greatly benefit those teaching advanced undergraduate and graduate courses on state making as it provides a fresh take on the art of state making in a modern world.

Critical Acclaim
‘Though the emergence and evolution of state sovereignty is a central concern for the discipline of international relations, until recently there were very few studies that explored this phenomenon outside of Europe in a comparative manner. De-Centering State Making more than fills this gap. This expertly edited volume brings together an impressive array of contributors to advance our understanding of modern state making around the world to a whole other level.’
– Ayşe Zarakol, University of Cambridge, UK
Contributors
Contributors: J. Bartelson, A. Björkdahl, C. Butcher, A. Goenaga, R. Griffiths, J. Grzybowski, M. Hall, J.K. Hanson, A. Learoyd, E. Ravndal, T. Svensson, J. Teorell, A. von Hagen-Jamar

Part II: What states does war make?
5. When Does War Make States? War, Rivalries and Fiscal Extraction in the Nineteenth and Twentieth Centuries
Agustín Goenaga and Alexander von Hagen-Jamar

6. War and Variation in the Structure of Historical International Systems: A Theoretical Model
Charles Butcher and Ryan Griffiths

9. Acting Like a State: Non-European Membership of International Organisations in the Nineteenth Century
Ellen Ravndal

A Research Agenda for Corporations