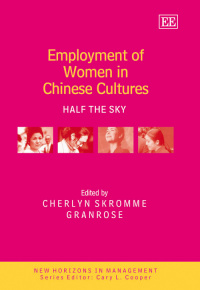 Employment of Women in Chinese Cultures

More Information
Critical Acclaim
Contributors
Contents
More Information
Examining the employment lives of Chinese women living under different government systems at the beginning of the twenty-first century, the contributors to this volume present an overview of factors affecting the employment status of women. The volume includes chapters on the People’s Republic of China, Taiwan, Hong Kong and Singapore – nations that have common Chinese cultural experiences but very different economic systems and government structures.

Policies and laws vary widely in Chinese societies from the egalitarian, socialist provisions of The People’s Republic of China to the laissez-faire, capitalist policy the British advocated for the Hong Kong government before 1997. Employment of Women in Chinese Cultures provides a theoretical introduction from both Chinese and Western perspectives, as well as summaries of the effect on women’s employment of government policies on taxation, health and safety, reproduction, childcare, and education in each nation-state. By juxtaposing the work of women of a similar cultural heritage living under different government systems, new insights are gained that can benefit Chinese working women wherever they live.