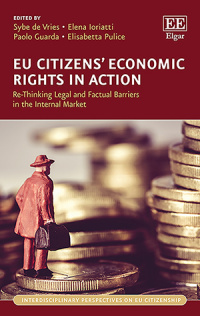 Re-Thinking Legal and Factual Barriers in the Internal Market

9781788113458 Edward Elgar Publishing
Interdisciplinary Perspectives on EU Citizenship series
Edited by Sybe de Vries, Utrecht University, the Netherlands, Elena Ioriatti, Paolo Guarda and Elisabetta Pulice, University of Trento, Italy
Publication Date: 2018 ISBN: 978 1 78811 345 8 Extent: 304 pp
This book analyses three important economic rights: consumer rights, rights of professionals in gaining access to the services market, and intellectual property rights in the light of the Digital Single Market. For each of these rights, contributors analyse the main pathways towards reducing and removing legal and factual obstacles to successful cross-border economic rights. In addition, the book takes into specific consideration the multifaceted issues related to the economic crisis and to the EU’s multilingualism.

More Information
Contributors
Contents
More Information
Ever since its inception, one of the essential tasks of the EU has been to establish the internal market. Despite the impressive body of case law and legislation regarding the internal market, legal and factual barriers still exist for citizens seeking to exercise their full rights under EU law. This book analyses these barriers and proposes ways in which they may be overcome.

In addition to analysing the key barriers to exercising economic rights more generally, this book focuses on three areas which represent the applications of the four basic freedoms (movement of goods, persons, services and capital): consumer rights, the rights of professionals in gaining access to the market and intellectual property rights in the Digital Single Market. With chapters from leading researchers, the main pathways towards the reduction and removal of these barriers are considered. Taking into account important factors, including the global financial crisis, and practical barriers, such as multilingualism, the solutions provided in this book present a pathway to enhancing cross-border realization of European citizens’ access to their economic rights, while increasing in the cultural richness of the EU.

PART I EU CITIZENS’ ECONOMIC RIGHTS AND BARRIERS TO THEIR EXERCISE: A CRITICAL OVERVIEW
1. General reflections on current threats and challenges to, and opportunities for, the exercise of economic rights by EU citizens
Sybe de Vries

PART II THE LEGAL-FACTUAL DICHOTOMY OF BARRIERS TO ECONOMIC FREEDOMS BASED ON THREE CROSS-NATIONAL CASE STUDIES
3. Union citizens and the recognition of professional qualifications: where do we go from here?
Silvia Adamo and Tom Binder

5. Intellectual property rights and barriers to EU citizens: copyright in the light of the Digital Single Market
Paolo Guarda

PART III HINDRANCES RESULTING FROM THE ECONOMIC CRISIS IN THE EURO ZONE
6. From economic crisis to identity crisis: the spoliation of EU and national citizenships
Vassilis Hatzopoulos

7. The charter in times of crisis: the empowerment of economic rights
Maribel González Pascual

12. The French language system: between protection and obstacles
Céline Lageot

13. EU multilingualism and rivalries of rights: from barriers to plurilingualism
Elisabetta Pulice