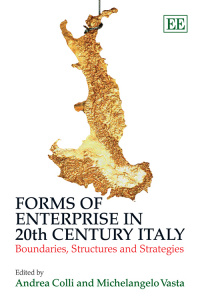 9781847203830 Edward Elgar Publishing
Edited by Andrea Colli, Department of Social and Political Sciences, Bocconi University, Italy and Michelangelo Vasta, Department of Economics, University of Siena, Italy
Publication Date: September 2010 ISBN: 978 1 84720 383 0 Extent: 352 pp
Taking an historical perspective, this unique book highlights the evolution of the many diverse forms of business enterprise, and discusses the contribution of these different types of firm to the economic growth of Italy.

More Information
Critical Acclaim
Contributors
Contents
More Information
Taking an historical perspective, this unique book highlights the evolution of the many diverse forms of business enterprise, and discusses the contribution of these different types of firm to the economic growth of Italy.

One important issue that has recently captured the attention and the research efforts of both economists and economic historians has been the debate on varieties of capitalism in the modern world. In this context, the expert contributors analyze the various stages of Italian development that have been characterized by diverse dominating forms of enterprise which, in turn, have adapted to the nature of technological and market opportunities at the institutional, national and international level. This book proposes a new interpretation of the ‘Italian case’ that utilizes both the structural and macroeconomic perspective of comparative history, as well as the microeconomic perspectives focusing on the strategies of different economic agents.

Based on solid quantitative evidence, this original work will prove to be a valuable resource for academics and students of strategy and organization, economic historians and applied economists.
Critical Acclaim
‘. . . the book invites the reader to consider the interaction of the different forms of enterprise with local and national institutional changes, coupled with the opportunities offered by international trade, in order to understand the conditions that allowed (but sometimes prevented) the country to gain from the different processes of technological advancements developed during the twentieth century. The very rich variety of subjects discussed and the widespread use of qualitative information to corroborate the analyses, offer a unique opportunity to look at the evolution of the Italian economy from many different views, and, cross-checking and referencing the different essays, to draw stronger and broader conclusions out of the information contained in each of them. . . this book is greatly rewarding reading for anyone interested in deepening knowledge of the rise and the ongoing transformation of Italian capitalism.’
– Federico Barbiellini Amidei, EH.NET

‘This book provides a wide-ranging analysis of change in size and nature of Italian firms, and thus a unique and fascinating perspective on the evolution of one of the major industrial economies of the 20th century. An example of business history as it ought to be done.’
– Giovanni Federico, European University Institute, Italy

‘This book is necessary reading for a real understanding of the evolution of Italian capitalism during the last century. It moves away from a simplified view of the Italian industrial structure as just composed by small enterprises and successfully sheds light on the variety of different forms of enterprises the compose Italian system. The lively picture that emerges from this book is the one of richer types of enterprises, which have evolved over time and have contributed in different ways to Italian economic growth.’
– Franco Malerba, Bocconi University, Italy
Contributors
Contributors: P. Battilani, L. Castellucci, A. Colli, L. Conte, S. Fari, F. Fauri, R. Giannetti, A. Giuntini, F. Lavista, G.M. Longoni, M. Perugini, G. Piluso, A. Rinaldi, V. Romei, P.A. Toninelli, M. Vasta, V. Zamagni
Contents
Contents:

PART III: IN SEARCH OF AN IDENTITY: STRUGGLING WITH THE CONTEXT
10. ‘Leaping Frogs’ in the Demography of Manufacturing Firms (1911–71)
Lucia Castellucci and Renato Giannetti