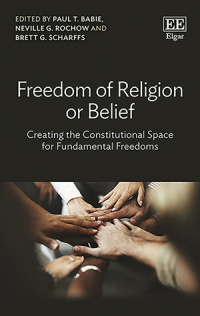 9781788977791 Edward Elgar Publishing
Edited by Paul T. Babie, Neville G. Rochow QC, Adelaide Law School, The University of Adelaide, Australia and Brett G. Scharffs, J Reuben Clark Law School, Brigham Young University, US
Publication Date: 2020 ISBN: 978 1 78897 779 1 Extent: 416 pp
Using the metaphor of ‘constitutional space’, this thought-provoking book describes the confluence and convergence of powers in a constitutional system, comprised of the principled exercise of the legislative, executive and judicial powers of constitutional government. Addressing the issues surrounding the freedom of religion or belief, the book explores the dimensions of constitutional space and the content of this freedom, as well as comparative approaches to defining and protecting this freedom.

The book asserts that when governance is guided by principle, convergence creates greater space for all human rights and fundamental freedoms; both community and individuals thrive. Conversely when any right or freedom is given precedence over any other for reasons of political expediency, this results in the loss or diminution of human rights and fundamental freedoms. Addressing the issues surrounding the freedom of religion or belief, this timely book explores the dimensions of constitutional space and the content of this freedom, as well as comparative approaches to defining and protecting this freedom.

Freedom of Religion or Belief will be a key resource for academics working in the fields of law and religion, law and society and human rights law. It will also appeal to practitioners and policy-makers working on the issue of religious freedom.

Critical Acclaim
‘Freedom of Religion or Belief is an exceptional contribution to the important debate over the potential conflicts between the freedom of religion and belief and other important freedoms. The book does a beautiful job of balancing chapters that explore the nature and importance of religious freedom and those that address the problems that can arise when religious freedom conflicts with the rights of others. Significantly, the book as a whole shows that these conflicts can be navigated without destroying religious freedom or other important freedoms.’
– Frank S. Ravitch, Michigan State University, US

PART I THE CONCEPT OF CONSTITUTIONAL
SPACE AND FREEDOM OF RELIGION OR BELIEF
2 Religious freedom as an element of the human rights
framework 20
Carolyn Evans and Cate Read
3 The problem and the promise of religious liberty 40
Joel Harrison
4 ‘A la carte’ spirituality and the future of freedom of religion 58
Jeremy Patrick
5 Towards a constitutional definition of religion: challenges
and prospects 92
Alex Deagon
6 Freedom of religion without a bill of rights: Australia’s
peculiar approach to tackling freedom of religion and
other human rights issues 109
Renae Barker
7 The effect of s 116 of the Australian Constitution on the
implied freedom of political communication 131
Joshua Forrester
8 Conceptualising reasonable accommodation 164
Brett G. Scharffs
vi Freedom of religion or belief
9 Protection of religious freedom under Australia’s
amended marriage law: constitutional and other issues 184
Neil Foster
10 Identifying faith-based entities for the purposes of
antidiscrimination law 207
Mark Fowler

PART II COMPARATIVE PERSPECTIVES
11 Reconciling democracy and human rights: implementing
the expressive freedoms of the International Covenant on
Civil and Political Rights in Australian law 232
Paul M. Taylor
12 It works better if it is not too secularised: the Croatian
constitutional model for regulating state–church relations 260
Vanja-Ivan Savić
13 Locating freedom of religion within the qualified rights
of the European Convention on Human Rights and in the
jurisprudence of Strasbourg 283
Mark Hill QC
14 The Iraqi constitutional failure to protect the right to
freedom of religion or belief 298
Ewelina U. Ochab
15 An assessment of the constitutional space for secularity
and equality in India 319
Arvind P. Bhanu
16 The development trend concerning administration of
religion and religious affairs in China 339
Ping Xiong
17 Apostasy and freedom of religion in Malaysia 363
Joshua Neoh