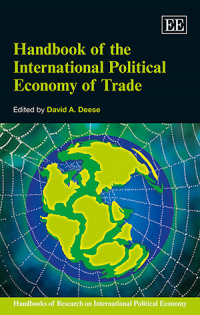 Handbook of the International Political Economy of Trade

9781783477432 Edward Elgar Publishing
Handbooks of Research on International Political Economy series
Edited by David A. Deese, Professor of Political Science, Boston College, US
Publication Date: 2016 ISBN: 978 1 78347 743 2 Extent: 648 pp
David A. Deese brings together leading researchers and writers from different countries and disciplines in a coherent framework to highlight the most important and promising research and policy questions regarding international trade. The content includes fundamental theory about trade as international communication and its effects on growth and inequality; the domestic politics of trade and trends in government trade policies; the implications of bilateral and regional trade (and investment) agreements; key issues of how trade is governed globally; and how trade continues to define and advance globalization from immigration to the internet.

More Information
Critical Acclaim
Contributors
Contents
More Information
Integrating work from the fields of political science, economics, law and policy the Handbook of The International Political Economy of Trade is a fresh perspective on the fundamental political causes and consequences of trade.

Under the guidance of David Deese, a prestigious group of international authors address the most important and promising research questions underlying international trade policy today including:

• Trade as an ‘Engine’ of integration, growth or inequality?
• Domestic politics, development strategy and democracy
• Regions and regionalism in the lead
• The global governance of trade: who’s accountable and who governs?
• Trade as globalization
• The future of trade

This accessible, comprehensive and pertinent Handbook will be of interest to academics, researchers and students working in the fields of international politics, in particular political economy and foreign policy, and the economics of trade. Practitioners working in civil society trade organizations, government agencies, and intergovernmental organizations will also find much of interest.
Critical Acclaim
‘This extensive collection, skillfully edited by David Deese, provides a comprehensive overview of the politics of international trade in the contemporary era. Bringing together an unusually diverse group of scholars from multiple disciplines, approaches, and countries, the volume examines trade both on its own terms and in relation to a host of other topics, including human rights, the environment, the internet, and more. Essential reading for experts and students alike.’
– David A. Lake, University of California, San Diego, US

‘Since the global financial crisis, policymakers and researchers need to revisit the fundamentals of global governance. The Handbook of the International Political Economy of Trade tightly edited by David Deese is an indispensable roadmap and guide to the rapidly evolving multilateral system of trade – its institutions, processes, regulatory rules and trade politics. In particular students will find the diversity of perspectives and approaches of the contributors essential to grasp the dynamics of the world trading order being reshaped by regional trade agreements, the rise of emerging market economies, global value chains and new trade strategies. The Handbook is packed with information, analytical insight and case studies from an international political economy perspective. It makes for essential reading about the interface between trade, global governance and domestic politics.’
– Daniel Drache, Robarts Centre for Canadian Studies, York University, Toronto, Canada

PART I: TRADE AS AN “ENGINE” OF INTEGRATION, GROWTH, OR INEQUALITY?
2. Commerce as Communication: Montesquieu’s View
Randal R. Hendrickson

9. Democracy and Trade: Which Leads and How?
Andrey Tomashevskiy

PART III: REGIONS AND REGIONALISM IN THE LEAD
10. Regionalism’s Past, Present, and Future
Greg Anderson

14. The EU, China and Trade in ‘Green’ Technologies: Cooperation and Conflict
Maria Garcia

PART IV: The Global Governance of Trade: Whose Accountable and Who Governs?
15. Trade Policy Review and Dispute Settlement at the WTO
Marc D. Froese

19. Capitalism in Large Emerging Economies and the New Global Trade Order
Christian May and Andreas Nölke

PART VI: THE FUTURE OF TRADE
22. The Design of Social Standards in EU and US Preferential Trade Agreements
Evgeny Postnikov

23. Trade and the Internet: Policies in the US, EU, and Canada
Susan Ariel Aaronson and Rob Maxim