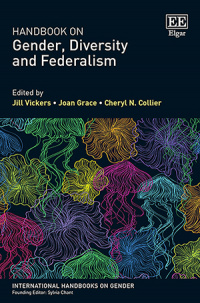 Key chapters examine critical policy issues in federations, drawing on a range of disciplines to offer fresh insights into how federal practices, institutions and discourses interact with gender and other diversities including ‘race’, religion and sexual minorities. In this timely and authoritative examination, feminist scholars in both the West and the global south debate the impact of state architectures on women’s movements, partisan organizations and policy advocacy using innovative discursive, institutional, quantitative and intersectional approaches.

Critical Acclaim
‘The book undoubtedly offers a solid and important academic contribution, a learning tool for students, an accessible read for nonexperts, and an important guide for legislators and policy makers. It paves the way for further research in a range of different contexts including theory building, expanded case studies, and systematic country comparison.’
– Christine Forster, Publius, The Journal of Federalism

‘This Handbook is a welcome innovation in studies about feminism and federalism. It investigates new questions and new federations. However, its main contribution is to show not only the distributive consequences that federal institutions have on gender policies and relations but also the mechanisms that make this impact possible.’
– Catalina Smulovitz, Torcuato di Tella University, Argentina

‘This Handbook is at the cutting edge of feminist political science, interrogating the complex interaction between federalism and gender in novel ways. The Handbook pushes the field of gender and federalism in two exciting new directions: first, it expands the field to take account not only of gender but also other identities that are territorially organised. Second, it moves the analysis further than the ‘usual’ western liberal cases to explore how federalism and federalization operates in the global south including Latin America, Asia and Africa. Importantly, it pays close attention to colonial/decolonial dynamics within multi-level states, to help us understand how gender and other identities are shaped by state architecture. It’s a breakthrough book that will undoubtedly reshape the field.’
– Louise Chappell, University of New South Wales, Australia