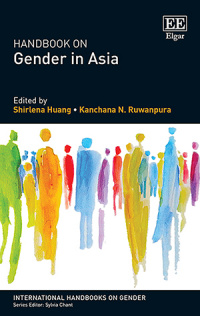 Handbook on Gender in Asia

9781788112901 Edward Elgar Publishing
International Handbooks on Gender series
Edited by Shirlena Huang, Associate Professor, Department of Geography, National University of Singapore and Kanchana N. Ruwanpura, Department of Economy and Society, The University of Gothenburg, Sweden
Publication Date: 2020 ISBN: 978 1 78811 290 1 Extent: 456 pp
The Handbook on Gender in Asia critically examines, through a gender perspective, five broad themes of significance to Asia: the ‘Theory and Practice’ of researching in Asia; ‘Gender, Ageing and Health’; ‘Gender and Labour’; ‘Gendered Migrations and Mobilities’; and ‘Gender at the Margins’. With each chapter providing an overview of the key intellectual developments on the issue under discussion, as well as empirical examples to examine how the Asian case sheds light on these debates, this collection will be an invaluable reference for scholars of gender and Asia.

More Information
Critical Acclaim
Contributors
Contents
More Information
Exploring gender as a fundamental factor in the way that lives of individuals, families and societies across Asia are organized, this timely Handbook studies the importance of modernization and globalization for understanding gender in Asia. It brings together a wide range of scholarly perspectives on five critical areas in the field: ageing and health; labour; migrations and mobilities; gender at the margins, and the theory and practice of researching in Asia.

Identifying gaps in current research, and using both qualitative and quantitative methods to explore the topic, this volume demonstrates the difference a gendered perspective makes in providing a better understanding of these issues in Asia. Using empirical case studies, contributors highlight the challenges and changes to cultured traditions and practices that surround gendered norms surrounding the societal roles of men and women in Asia. The volume offers fresh, nuanced insights to socio-political currents in Asian countries.

This far-reaching collection will be an essential read for scholars in the social sciences interested in gender issues in Asia, human geography, sociology, anthropology, development studies, gender politics; and for NGOs and policy-makers.

Critical Acclaim
‘The book captures gendered phenomenon in Asia through Asian voices not only 'in the case studies discussed, but also because authors in and from Asia figure strongly' and provides a rich overview of gender in Asia adopting a multi-disciplinary approach. A delightful read for not only those engaged in the field of gender, but to anyone interested in learning how gender plays out a key role in our everyday life.’
– Nedha de Silva, Progress in Development Studies

‘The Handbook is a great text for those studying gender in Asia, whether at graduate or undergraduate level. It is also a valuable introduction for graduate and undergraduate students in geography, sociology, anthropology, and global studies, and for policy-makers and women’ s rights practitioners who are interested in learning about gendered social life in Asia and the current gender scholarship on Asia.’
– Chien-Juh Gu, Gender & Development

‘The strengths of the Handbook lie in its focus on gendered patterns of inter-Asia migration experienced by women from across different socioeconomic groups as represented by several compelling contributions.’
– Alicia Izharuddin, South East Asia Research

SECTION 1 – GENDER IN ASIA: THEORY AND PRACTICE
2. Patriarchal Bargains and a Triple Bind: On Writing Geographies of Gender in India
Anindita Datta

3. ‘You are (Hong Kong) Chinese! You Should Understand our Culture!’ Reflections of a Chinese Male Ethnographer on Researching Nepali Drug Users in Hong Kong
Wai-man Tang

4. ‘The Only Blond Girl in Manila’: Challenges and Opportunities as a White Western Young Woman Postgraduate Researching in Asia
Maddy Thompson

11. Gendering Work and Labor in the Agriculture Sector: A Focus on South Asia
Cynthia M. Caron

16. Beyond the ‘Age’ Lens: Older Migrants’ Negotiation of Intersectional Identities over the Lifecourse
Menusha De Silva

17. From Factory Worker to Foreign Wife: Reading Migration and Development through a Gender Perspective
Hyunok Lee

SECTION 5 – GENDER AT THE MARGINS
21. Migrant Workers and Childcare at the Place of Destination: An Overview of Issues in the Mekong Region, South East Asia
Kyoko Kusakabe

23. Exploring the Continuum: Violence Against Women and Security in Nepal’s Transition to Peace
Smita Ramnarain