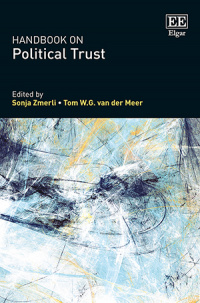 9781782545101 Edward Elgar Publishing
Edited by Sonja Zmerli, Sciences Po Grenoble, France and Tom W.G. van der Meer, University of Amsterdam, the Netherlands
Publication Date: 2017 ISBN: 978 1 78254 510 1 Extent: 560 pp
Political trust – in government, parliament, or political parties – has taken centre stage in political science for more than half a century, reflecting ongoing concerns with the legitimacy and functioning of representative democracy. To provide scholars, students and policy makers with a tool to navigate through the complexity of causes and consequences of political trust, this Handbook offers an excellent overview of the conceptual, theoretical, methodological and empirical state of the art, complemented by accounts of regional particularities, and authored by international experts in this field.

More Information
Critical Acclaim
Contributors
Contents
More Information
Political trust – of citizens in government, parliament or political parties – has been centre stage in political science for more than half a century, reflecting ongoing concerns about the legitimacy of representative democracy. This Handbook offers the first truly global perspective on political trust and integrates the conceptual, theoretical, methodological, and empirical state of the art.

An impressive, international body of expert scholars explore established and new venues of research, by taking stock of levels, trends, explanations and implications of political trust, and relating them to regional particularities across the globe. Along with a wealth of genuine empirical analyses, this Handbook also features the latest developments in personality, cognitive and emotional research and discusses, not only the relevance, but also the ‘dark side’ of political trust.

Discerning yet accessible, this Handbook provides scholars, students and policy makers with the tools to navigate through a complexity of theories, trends, causes and consequences of political trust, whilst also directing their future research.
Critical Acclaim
‘This Handbook offers a comprehensive account of what is currently known about political trust. In 29 chapters a stellar cast of 41 authors informs about the concept, its measurement, and correlates. In addition, they document empirically the development and distribution of political trust across the globe in different political settings. This volume is a “must read” for all those interested in political trust as a major resource for the political community, the political regime, and the political authorities.’
– Hans-Dieter Klingemann, Social Science Research Center Berlin, Germany

‘In Handbook on Political Trust, edited by Sonja Zmerli and Tom W.G. van der Meer, an international body of 41 experts offers an excellent overview of the scholarly literature on political trust, complemented by original empirical research and analysis. Across the chapters, the authors pinpoint gaps in the literature and identify new venues for research, making this handbook a valuable reference book, tool and guide for advanced students of political science, finds Nazrin Mehdiyeva.’
– LSE Review of Books

3. What Kinds of Trust Does a Democracy Need? Trust from the Perspective of Democratic Theory
Mark E. Warren

18. The Welfare State and Political Trust: Bringing Performance Back in
Staffan Kumlin and Atle Haugsgjerd

29. Political Trust and the Decline of Legitimacy Debate: A Theoretical and Empirical Investigation into their Interrelationship
Jacques Thomassen, Rudy Andeweg and Carolien Van Ham