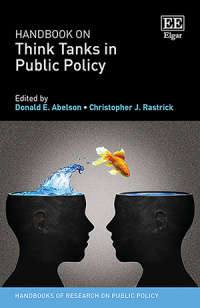 More Information
Critical Acclaim
Contributors
Contents
More Information
This important Handbook is a comprehensive guide to the role, function and perceived impact of policy research-oriented institutions in North America, Europe and beyond. Over 20 international scholars explore the diverse and eclectic world of think tanks to reveal their structure, governance and unique position in occupying a critical space on the public policy landscape.

This Handbook serves as a reference point for understanding how think tanks shape public opinion and public policy, and how their directors help them navigate their way through an increasingly crowded marketplace of ideas. It also considers how these organizations enlist various actors (such as policymakers, the media, donors and industry leaders) to influence the discourse around key domestic and foreign policy issues.

The Handbook on Think Tanks in Public Policy is an invaluable resource for academics and students who wish to further their understanding of how to measure the impact and reach of think tanks. It will also be useful for policymakers and non-governmental organizations who are interested in the expertise think tanks can offer on policy-related issues, and for donors whose main goals and objectives may be advanced by these organizations.

Critical Acclaim
‘This is a remarkable collection of expert analysis on the politics, practices and study of think tanks. Abelson and Rastrick have curated a collection that adds significantly to our appreciation of the role of think tanks in different geographical and political contexts, and explores the dynamics and influence of think tanks within the nation-state and those that operate globally. The collection combines insightful insider reflections with scholarly discussion to provide an invaluable addition to our understanding of these important institutions.’
– Helen Sullivan, Crawford School of Public Policy, Australia

‘I started my career in Washington, DC think tanks in 1993, and reading this impressive collection of analytical perspectives on think tanks in Washington, DC, and around the world made me feel like a monkey in the zoo who suddenly realized that I was in a zoo! The authors provide the perspective that a think tanker lacks, and I learned something important and useful from every chapter. More importantly, these scholarly perspectives rang true. This book is a monumental contribution to the literature, but more than that, it is a must-read for policy scholars and policymakers seeking to understand us monkeys, our influence, and what it is we do.’
– Christopher Sands, Wilson Centre, US
Contributors
Contributors: D.E. Abelson, K. Bowman, J. Braml, S. Brooks, N. de Graaff, A. Garcé García y Santos, M. Garnett, N. Goren, J.D. Kelstrup, J. Landry, L. Li, E. Lindquist, C. López Burian, V. Lorenzoni, E. Mendizabal, I. Parmar, M. Pirie, D. Plehwe, C.J. Rastrick, D. Schwarzer, D. Stone, R.J. Struyk, J. Tchilingirian, H. Ullrich, B. van Apeldoorn, S. Yin

PART III INFLUENCE AND IMPACT: HOW CAN WE
UNDERSTAND THINK TANK PERFORMANCE?
8 Think tanks and policy communities: analysing policy
influence and learning from the analogue to the digital era 100
Evert Lindquist
9 Think tanks beyond the nation-state: policy analysis for global
policy and transnational administration 119
Diane Stone
10 If it doesn’t matter, why measure it? Reflections on think tank
rankings and policy influence 134
Donald E. Abelson
11 Think tanks and the politics of climate change 150
Dieter Plehwe