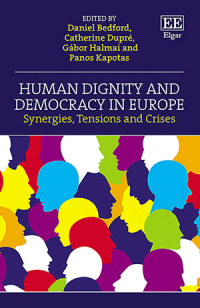 Human Dignity and Democracy in Europe

More Information
Critical Acclaim
Contributors
Contents
More Information
This collection identifies and discusses the connections between human dignity and democracy from theoretical, substantive, and comparative perspectives. Drawing on detailed analyses of national and transnational law, it provides timely insights into uses of human dignity to promote and challenge ideas of identity and solidarity.

Highlighting human dignity’s significance for inclusive democracy, the book’s thirteen chapters underline how threats to human dignity can also be a danger to democracy itself. Critical analysis of the commitment to protect the dignity of all human beings following the rise of nationalism, illiberalism and identity politics are thoroughly reviewed. The volume further addresses urgent questions about today’s democratic societies in the context of Europe’s multiple crises.

Written in an accessible style, this innovative book will be an excellent resource for both scholars of human dignity and human rights law, European law and politics, as well as non-experts looking to further their understanding of the topic.

Critical Acclaim
‘Dignity and democracy are preferred topics of comparative constitutional research. But surprisingly enough, the connections between the two concepts have not yet been explored in academic writing. This book puts an end to that situation and opens a new perspective on two pillars of modern constitutionalism.’
– Dieter Grimm, Humboldt University Berlin and Former Justice, Federal Constitutional Court of Germany

‘An ambitious and successful effort to move the focus on constitutional democracy from citizens to human flourishing. Human Dignity and Democracy in Europe highlights the democratic and constitutional commitments to creating regimes that allow all residents to see themselves as involved in common public projects, and the threats to such commitments presented by the rise of illiberal constitutionalism, austerity, and COVID-19.’
– Mark Graber, University of Maryland, US

‘The legal relevance of dignity is challenged at a time of democratic backlash, identitarian crisis and exclusionary politics. The authors of this volume argue that dignity is both the pre-condition and ultimate aim of European democracy. They provide a balanced and realistic approach to the practical uses of dignity in law in Europe and elsewhere.’
– András Sajó, Central European University, Hungary/Austria

‘This valuable book, Human Dignity and Democracy in Europe, explores the connections between dignity and democracy, a topic that has not received much scholarly attention. Including contributions from academics of varying backgrounds who are experts in this field, it brings together a range of perspectives and offers impressive insights into this highly significant area, of especial value at the present time when in some Council of Europe states, such as Hungary, both democracy and dignity appear to be coming under threat.’
– Helen Fenwick, Durham University, UK
Contributors
Contributors: Antonia Baraggia, Daniel Bedford, Nóra Chronowski, Erin Daly, Maria Dicosola, Catherine Dupré, Gábor Halmai, Stéphanie Hennette-Vauchez, Panos Kapotas, Colm Ó Cinnéide, Cesare Pinelli, Stephen Riley, Przemyslaw Tacik
Contents
Contents:

PART II IDENTITY
5 On the dilemma between human dignity and national identity 103
Cesare Pinelli
6 Human dignity as status politics 119
Stéphanie Hennette-Vauchez
7 The right to citizenship and human dignity 137
Maria Dicosola
8 Discourses of collective dignity, the state of exception and
the twilight of the rule of law: the case of Poland and beyond 155
Przemyslaw Tacik