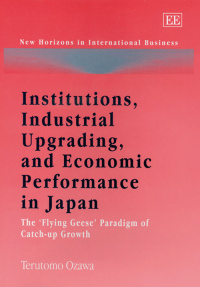 More Information
Critical Acclaim
Contents
More Information
Terutomo Ozawa examines Japan’s once celebrated post-war economic success from a new perspective. He applies a ‘flying geese’ model of industrial upgrading in a country that is still catching-up, to explore the rise, fall and rebound of Japanese industry with its evolving institutions and policies.

The book brings together and expands upon theories developed in the author's work over many years, using them as building blocks for his flying geese model. Concepts explored include:

The dynamic process of industrial upgrading is analysed in detail, and important lessons for both developing and transition economies are highlighted.

This fascinating book will attract a wide-ranging readership, encompassing practitioners and academics interested in international business, economic development, trade, and political science. In addition, sociologists focussing on business and industry, and researchers on, and policymakers in, developing and transition economies will also find this book of immense interest.
Critical Acclaim
‘. . . the book reviewed here will trigger a further interest in this area of research, and will invite more researchers to seek empirical evidence in the study of post-war industrial growth in Japan.’
– Hiroshi Ohashi, Journal of the Japanese and International Economies

‘This book provides a theoretically informed and empirically illustrative account of modern Japanese industrialization. Ozawa’s translation of classical political economy to the Japanese context is both original and accessible and is a welcome addition to the literature on the Japanese variety of capitalism.’
– Tim Reiffenstein, Pacific Affairs

‘Ozawa succeeds in extending, building up, and joining the Akamatsu–Kojima lineage of this unique Japan-born theory of economic development from a fresh, unconventional, and discerning perspective.’
– From the foreword by Kiyoshi Kojima

Handbook on Diversity and Inclusion Indices

A Research Agenda for International Business and Management