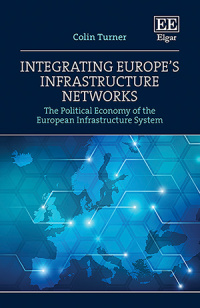 The Political Economy of the European Infrastructure System

9781839105470 Edward Elgar Publishing
Colin Turner, Institute for Infrastructure, Heriot-Watt University, UK
Publication Date: 2021 ISBN: 978 1 83910 547 0 Extent: 192 pp
This timely book explores the long-standing process of infrastructural integration across Europe, with a particular focus on the EU member states. It illuminates the main economic infrastructure sectors, including transport, energy and information, examining how the process of infrastructural integration reflects an alignment of the needs of the states that are the main drivers behind this process.

Colin Turner highlights how these inter-governmental driven processes are supported by a series of policy measures undertaken at the supranational level by the EU, largely through the trans-European network initiative. Multidisciplinary chapters offer a thorough examination of trends in regional integration, and an in-depth analysis of core infrastructure sectors. The book further looks at the co-operative territoriality that is needed for the integration process, and that is driven by an alignment between states’ territorial and geo-political strategies.

Offering a contextualised analysis within the framework of state strategy, this will be an invigorating read for political economy and public policy scholars, particularly those focussing on the EU. It will also be helpful to public policy practitioners and sector specific consultants looking for up-to-date insights on the topic.

Critical Acclaim
‘Colin Turner pays due attention to the financial and political challenges of massive transport projects as well as to the emergence of “soft infrastructures” and the role of the market in driving their development. Particularly novel, given the rise of the “information society”, is the focus on political efforts to create a common information area and the crucial role that digital infrastructures now play, considering how norms and standards are managed, and how issues of state control and sovereignty play out. A timely publication looking close up at a fascinating and complex subject that is at the intersection of regionalism, transport planning, geography, security, finance and political economy, technology studies, multi-level governance, EU politics and integration.’
– Paul Stephenson, Maastricht University, the Netherlands

‘Colin Turner’s insightful new book not only provides a comprehensive understanding of how Europe’s infrastructures have integrated over recent times but also useful new conceptual approaches and analytical frameworks for understanding the dynamics and development of infrastructure itself. I highly recommended it for anyone wanting to know more on the subject.’
– Christopher M. Dent, Edge Hill University, UK

‘Over more than twenty years Colin Turner has made a number of incisive and insightful contributions on infrastructure, and this book is another. Its analysis and observations on the concept and practice of regional integration are especially valuable at a moment in which, culturally and politically, disintegration is en vogue.’
– Andrew, Mearman, University of Leeds, UK