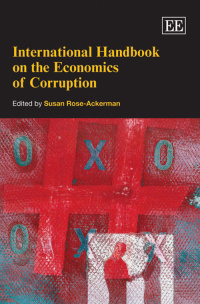 International Handbook on the Economics of Corruption

More Information
Critical Acclaim
Contributors
Contents
More Information
Economic research on corruption aims both to isolate the economic effects of quid pro quo deals between agents and third parties, and to suggest how legal and institutional reforms might curb harms and enhance benefits. In this comprehensive Handbook, top scholars in the field provide specially commissioned essays, both theoretical and empirical, exploring both types of research.

The Handbook begins with an introductory essay by the editor, followed by two chapters written by leading exponents of cross-country research. However, the focus of the Handbook is on research at the micro level, where policy can be made and evaluated. These microeconomic studies fall into several overlapping categories. The first group includes studies that link corrupt incentives to institutional structures, particularly the organization of the state. The second draws implications from surveys of households or businesses and from controlled experiments. The third concentrates on particular sectors such as education, tax administration, public works, customs services, and pharmaceuticals. Finally, two chapters assess corruption in the transition away from socialism in Europe and Asia.
Critical Acclaim
‘This book gives a deep understanding of the subject of corruption and could prove a useful means of citing established research by high-ranking professors, in the defence of cross-border corruption trials.’
– Sally Ramage, The Criminal Lawyer

‘The International Handbook on the Economics of Corruption is a comprehensive volume on the subject, which was first pioneered by the editor, Susan Rose-Ackerman. . . The work fills a significant gap in the literature on the economics of corruption. . . the volume is a must-have resource for economists studying corruption alone or as a facet of development or regulation.’
– Sara Hsu, Heterodox Economics Newsletter

‘. . . the volume is a must-have resource for economists studying corruption alone or as a facet of development or regulation.’
– Sara Hsu, Public Choice

‘This collection of articles offers a comprehensive assessment of the subtle but nevertheless pervasive economic infrastructure of corruption. It provides suitable core or adjunct reading for law school, graduate, and undergraduate courses on international economics, international relations and international law.’
– American Society of International Law

‘This exhaustive collection, edited by Rose-Ackerman, cannot be called anything but excellent. . . . Overall, a wonderful addition to the literature. Highly recommended.’
– C.J. Talele, Choice

PART I: CORRUPTION AND POOR GOVERNANCE AROUND THE WORLD
1. Causes and Consequences of Corruption: What Do We Know from a Cross-Section of Countries?
Johann Graf Lambsdorff

PART III: CORRUPTION IN THE TRANSITION FROM SOCIALISM
9. The Effectiveness of Anti-Corruption Programs: Preliminary Evidence from the Post-Communist Transition Countries
Alan Rousso and Franklin Steves

PART IV: SURVEYS AND EXPERIMENTS
11. Why Are Some Public Officials More Corrupt Than Others?
Jennifer Hunt

12. Corruption and the Demand for Regulating Capitalists
Rafael Di Tella and Robert MacCulloch

PART V: SECTORAL ANTI-CORRUPTION POLICIES
15. How Corruption Affects Service Delivery and What Can Be Done About It
Ritva Reinikka and Jakob Svensson

16. Corruption and the Management of Public Works in Italy
Miriam Golden and Lucio Picci

18. The Economics of Anti-Corruption: Lessons from a Widespread Customs Reform
Dean Yang