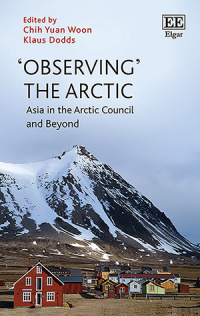 Asia in the Arctic Council and Beyond

9781839108204 Edward Elgar Publishing
Edited by Chih Yuan Woon, Associate Professor, Department of Geography, National University of Singapore, Singapore and Klaus Dodds, Professor of Geopolitics, Royal Holloway, University of London, UK
Publication Date: 2020 ISBN: 978 1 83910 820 4 Extent: 256 pp
Addressing the growing economic, political, and cultural presence of Asian states in the Arctic region, this timely book looks at how that presence is being evaluated and engaged with by Arctic states and their northern communities. A diverse range of authors addresses the question that underpins so much of this interest in Asian engagement with the northern latitudes: what do Asian countries want to gain from the Arctic?

More Information
Critical Acclaim
Contributors
Contents
More Information
Addressing the growing economic, political, and cultural presence of Asian states in the Arctic region, this timely book looks at how that presence is being evaluated and engaged with by Arctic states and their northern communities. A diverse range of authors addresses the question that underpins so much of this interest in Asian engagement with the northern latitudes: what do Asian countries want to gain from the Arctic?

Although China, Japan, India, Singapore and South Korea were only accepted as formal observers to the Arctic Council in 2013, this book outlines a longer history of Asian-Arctic engagement that spans centuries. It highlights how this role as observer generates new challenges, dangers and opportunities for Arctic states and their northern communities. Climate change, energy and other resources such as fish, global geopolitical change and northern autonomy are shown to all play a part in mediating how Asian states are observed and evaluated in the Arctic Council and beyond.

Students of Asian and Arctic studies will find the exploration of the roots of religion, culture and trade in the long-standing Asian interest in the Arctic to be compelling. This will also be a beneficial read particularly for scholars in geopolitics, international relations and political science as it shows how an intergovernmental forum can have global, national and local impacts.

Critical Acclaim
‘What is the role of the global Arctic narrative? Why do Asian states strongly request to join the Arctic Council but are not active in the working groups? This book provides insightful observations on similar important questions, exploring the wider role of Asian states in the Arctic.’
– Ping Su, International Arctic Science Committee

‘Focusing on critical geopolitics and drawing upon case studies from China to India, and from Indigenous Peoples to the Arctic Council, this is an important contribution to the growing body of academic studies focused on Asia in the Arctic. The authors revealed how geographical imaginaries, geopolitical dynamics and regimes of governance meet. Highly recommended for anyone interested in gaining a deeper understanding of the dynamics at play in the Arctic, or in the politics of peripheries and frontiers.’
– Aki Tonami, University of Tsukuba, Japan

‘The increased accessibility of the Arctic as the world’s climate warms and sea-ice retreats for a larger portion of the year has made the region something of a hotspot for global geopolitics. This original and lively collection is devoted to how and why Asian states, traditionally not important actors in Arctic affairs, have become focused on and involved in the region. Given the ongoing shift in the world’s center of economic gravity towards Asia this is a necessary read for anyone who wants to understand the world of tomorrow.’
– John Agnew, UCLA, US and author of Globalization and Sovereignty (2018)

Section II- Asia and the Arctic and Arctic States in Asia
Chapter 5: The Arctic Policy of China: An Analysis of Russian Academic Discussions
Nadezhda Filimonova

Chapter 6: Observed as Arctic: Norwegian and Icelandic Arctic State Identities and the Asian ‘Other’
Ingrid A. Medby

Chapter 7: Going Beyond the ‘Original Inter-Arctic States’: China Acting in the Arctic and Observing the Arctic Council
Nong Hong

Chapter 10: The Fear of By-Pass: The Flexible Diplomacy of Jacking-up and Stretching out Singapore’s Arctic Connections
Chih Yuan Woon and Klaus Dodds

The Interaction of Competition Law and Sector Regulation