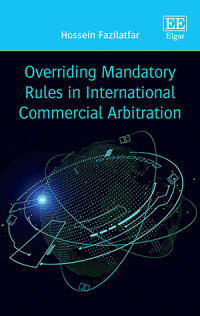 9781788973847 Edward Elgar Publishing
Hossein Fazilatfar, Assistant Professor of Business Law, College of Business, Western Carolina University, US
Publication Date: 2019 ISBN: 978 1 78897 384 7 Extent: 224 pp
Overriding Mandatory Rules in International Commercial Arbitration discusses the applicability of mandatory rules of law in international commercial arbitration and addresses the concerns of the arbitrators and judges at various stages of arbitration and the enforcement of the award.

More Information
Critical Acclaim
Contents
More Information
Arbitrators, unlike judges, are appointed by parties to resolve their transactional disputes. Because of such contractual appointment, arbitrators gain their authority from the parties, and thus must apply the law chosen by the parties to the dispute before them. However, there are overriding mandatory laws of other jurisdictions, that due to their imperative character may claim application to the dispute. The arbitrator, as a private adjudicator, has a duty to resolve a potential conflict that may arise between the law chosen by the parties and another mandatory law(s) that claims application and is not chosen by the parties.

Overriding Mandatory Rules in International Commercial Arbitration discusses the applicability of mandatory rules of law in international commercial arbitration and addresses the concerns of the arbitrators and judges at various stages of arbitration and the recognition and enforcement of the award respectively.

Legal scholars researching the law applicable in international commercial arbitration will find the answers they require within these pages, as will students. It will also prove helpful to practitioners, including arbitrators, judges and attorneys, as they deal with mandatory rules in practice.

Critical Acclaim
‘This book leads the reader through five chapters of a well-thought out perspective on the application of overriding mandatory rules in international commercial arbitration.’
– Patricia Živković, Edinburgh Law Review

‘Hossein Fazilatfar’s treatise deftly navigates a complex and enduring problematique of international arbitration scholarship and practice – how to reconcile the parties’ contractual bargain regarding choice-of-law with due consideration of imperative substantive rules while delivering an arbitral award that is minimally exposed to challenge or set aside claims. In doing so, he adds invaluable structure and methodology to the “unruly horse” of public policy/ mandatory law, deliberations about which have grown in number and complexity over the years. His book reminds us of the responsibility that arbitrators bear when addressing this problematique on a case-by-case basis, and the sophistication required to do so. Fazilatfar’s insightful solutions and critiques enlarge the analytical toolkit available to arbitrators, as well as to practitioners, students and the academy, to discharge that responsibility.’
– Gary Born, Wilmer Cutler Pickering Hale and Dorr LLP and
author of International Commercial Arbitration