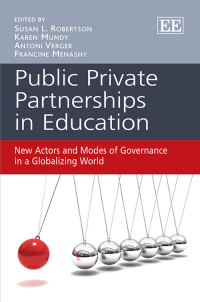 9780857930682 Edward Elgar Publishing
Edited by Susan L. Robertson, Faculty of Education, University of Cambridge, UK, Karen Mundy, University of Toronto, Canada, Antoni Verger, Universitat Autònoma de Barcelona, Spain and Francine Menashy, University of Massachusetts, US
Publication Date: 2012 ISBN: 978 0 85793 068 2 Extent: 320 pp
This insightful book brings together both academics and researchers from a variety of international organizations and aid agencies to explore the complexities of public private partnerships as a resurgent, hybrid mode of educational governance that operates across scales, from the community to the global.