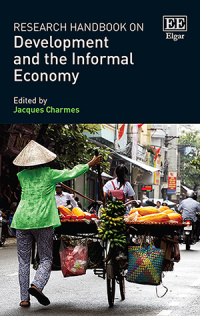 Research Handbook on Development and the Informal Economy

More Information
Critical Acclaim
Contributors
Contents
More Information
This Research Handbook on Development and the Informal Economy captures the magnitude of the informal economy for the global labour force. It unravels numerous concepts, definitions and methods of data collection to offer valuable insight into the differences between the informal, non-observed and shadow economies.

Situating the concept of the informal economy within the evolution of development theories, strategies and thinking over the past 50 years, this Research Handbook also explores the future direction of the informal economy. Chapters consider recent debates around the transition from the informal to the formal economy, a transition which would reshape the social contract between people and state. Expert international contributors examine a range of policies, actions, regions and groups of vulnerable workers to uncover which forms of organisation will lead to more power, recognition and sustainable livelihoods for the working poor. They also analyse how innovation, knowledge co-production and technological change at a grassroots level can improve the working and living conditions of the informal worker.

This Research Handbook maps the changing landscape of the informal economy and will be an essential resource for academics, researchers and students in the fields of development studies, economics and international studies.

Critical Acclaim
‘Jacques Charmes and Edward Elgar Publishing are to be warmly congratulated for this Research Handbook, which reflects on 50 years of academic discussion on the informal economy, and offers us new insights and inspiration for the next 50 years of such work.’
– Simon McGrath, University of Nottingham, UK

1 Why and how should the informal economy be revisited after
50 years? 1
Jacques Charmes

PART I CONCEPTS AND DEFINITIONS, METHODS OF
MEASUREMENT AND ESTIMATION, MAGNITUDE
AND CHARACTERISTICS, AND GLOBAL
CONCEPTION OF STRATEGIES
2 The success story of a loose but useful concept: origins,
development, magnitude and trends of the informal economy 19
Jacques Charmes
3 The Non-Observed Economy vs. the Shadow Economy in
the European Union: concepts, measurements methods and
estimates revisited 45
Philippe Adair
4 Informality and development in Africa 79
Dorothy McCormick, Erick Manga, Radha Upadhyaya,
Paul Kamau, Herbert Wamalwa and Samuel Ngigi
5 Facing informal economy practices and institutions:
the challenge of formalisation policies in Africa 116
Frédéric Lapeyre

PART III GIVING VISIBILITY AND VOICE TO THE MOST
VULNERABLE: OBSERVING, PARTICIPATING,
SUPPORTING AND ORGANISING
9 Street vendors in Tunisia: encountering the informal economy 240
Laurence Michalak
10 Formalisation from the ground: the case of waste pickers’
cooperatives 263
Sonia Maria Dias and Lucía Fernández
11 Collective bargaining by informal workers in the global South:
where and how it takes place 285
Françoise Carré, Pat Horn and Chris Bonner
12 Knowledge co-production with and for organisations of
informal workers: building democratic capacity for social
change 317
Ana Carolina Ogando and Jenna Harvey

PART IV SKILLS, INNOVATION AND IMPACT OF
TECHNOLOGICAL CHANGE IN THE
INFORMAL ECONOMY
13 Skills development and the informal sector: a review of reports
and commitments of the international institutions 347
Kenneth King
14 Informality and innovation: an avenue towards bottom-up
industrialisation for Africa? 363
Erika Kraemer-Mbula and Lorenza Monaco
15 Innovation in refugee economies: supporting intermediaries
that embrace informality 387
Jeremy de Beer and Nicole Tumaine
16 Women in the informal economy and the impact of
technological change 410
Jacques Charmes