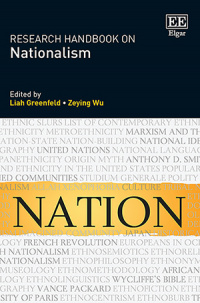 9781789903430 Edward Elgar Publishing
Edited by Liah Greenfeld, University Professor and Professor of Sociology, Political Science, and Anthropology and Zeying Wu, PhD Candidate, Department of Political Science, Boston University, US
Publication Date: 2020 ISBN: 978 1 78990 343 0 Extent: 496 pp
Assembling scholarship on the subject of nationalism from around the world, this Research Handbook brings to the attention of the reader research showcasing the unprecedented expansion of the scholarly field in general and offers a diversity of perspectives on the topic. It highlights the disarray in Western social sciences and the rise in the relative importance of previously independent scholarly traditions of China and post-Soviet societies. Nationalism is the field of study where the mutual relevance of these traditions is both most clearly evident and particularly consequential.

More Information
Critical Acclaim
Contributors
Contents
More Information
Assembling scholarship on the subject of nationalism from around the world, this Research Handbook brings to the attention of the reader research showcasing the unprecedented expansion of the scholarly field in general and offers a diversity of perspectives on the topic. It highlights the disarray in Western social sciences and the rise in the relative importance of previously independent scholarly traditions of China and post-Soviet societies. Nationalism is the field of study where the mutual relevance of these traditions is both most clearly evident and particularly consequential.

Chapters explore specific cases (some of them previously underexplored) across a range of topics, including: the construction of a national identity, the institutionalization of nationalism, democracy and self-determination, the roles of class, ethnicity, religion and race in nationalism, and the connection between nationalism and the economy. Offering a comparative perspective on nationalism across different regions and civilizations, this Research Handbook also allows the reader to compare and evaluate different approaches across the social sciences, re-examining their utility.

Political science, sociology and international relations scholars will find this to be an essential read in exploring the wide-ranging differences in nationalism across different countries, and its effects both historically and in modern times. This will also be a valuable book for policy-makers looking for different perspectives on the topic.

Critical Acclaim
‘The varieties of nationalism have long perplexed historians and humbled theorists. In this curated collection of articles representing investigations of special cases and concepts, the editors, Liah Greenfeld and Zeying Wu, have recognized and investigated that resistant diversity. No attempt is made to squeeze distinct stories into a common mold. Rather, readers may explore diverse examples and come to their own conclusions. This is an invaluable first stop for any researcher interested in understanding the complexities of our world in this time of multiplying misconceptions and their dangerous consequences.’
– Ronald Grigor Suny, University of Michigan and the University of Chicago, US

‘Wonderful analyses of nationalism appeared forty years ago, helping us to understand the resurgence of this force in the 1990s. But the world–and nationalism–has changed. This superb, highly innovative collection is very welcome: it ranges over the whole world, deals with cultures as well as structures, and its contributions–at last!–are neutral.’
– John A. Hall, McGill University, Canada

Introduction to the Research Handbook on Nationalism 1
Liah Greenfeld

PART I WHAT ON EARTH IS THIS ALL ABOUT?
Section A Between Left and Right
1 When right meets left: on the progressive rhetoric of far-right populist parties
in Europe 22
Francesco Duina and Dylan Carson
2 The left and nationalism: from the French Revolution to the Anthropocene 34
Daniele Conversi
Section B Post-Cold War Disarray
3 Nationalism and terrorism 54
Nick Brooke
4 Historical ethnic collective identity and citizenship in Azerbaijan, Georgia
and Moldova 66
Maxim Tabachnik
5 Dominant nation particularism in state-nations: Russian and Serbian
nationalism in Soviet and Yugoslav dissolution 78
Veljko Vujačić

PART II THE SIGNIFICANCE OF RACE
6 Race and nation in the formation of Brazilian identity 91
Leone Campos de Sousa
7 Ressentiment , nationalism and the emergence of political culture in Grenada 100
Oliver Benoit
8 Frantz Fanon and the dream of African nationalism 116
Oy.shiku Carr

PART VI BY THE SIDE OF EMPIRES
22 Mapping the matrix of nationalisms in Hong Kong: on the six generations of
Hongkonger identities from the 1920s to 2020 and their generational conflicts 290
Tommy Leung Yiu-man
23 “Liberate Hong Kong, the revolution of our times”: the birth of the first
Orient nation in the twenty-first century 312
Yuk-man Cheung
24 The road to Catalan independence: sovereignty, self-determination and the
struggle for democracy, 2006–19 334
Agust. Colomines i Companys
25 We are two nations: bivocal nationalism in Georgia 347
Nutsa Batiashvili

PART VIII CIVILIZATIONAL SPECIFICITIES
Section A Monotheistic Civilization
28 Nationalism and religion: Christianity 384
Nicolas Prevelakis
29 Polish nationalism and the Jews 395
Genevi.ve Zubrzycki
30 The return of the image of the Jew as Poland’s threatening other: Polish
national identity and antisemitism in the third decade after the end of
communism in 1989 406
Joanna Beata Michlic
Section B Chinese Civilization
31 Neo-authoritarianism: a new type of Chinese nationalism 428
Zhidong Cai
32 The transformation of the Chinese nationalist discourse system and research
paradigm over 40 years of "reform and opening-up" 440
Hongying Hu
33 The problem of Chinese nationalism: Eurocentrism, US exceptionalism and
de-colonization in the modern world-system 453
Tung-Yi Kho