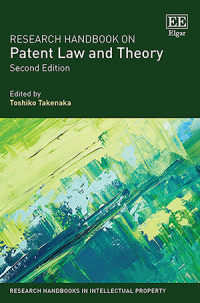 Leading patent scholars and practitioners provide an innovative comparative analysis of fundamental issues such as patentability, examination procedure and the scope of patent protection, with current issues such as patent protection for industry standards, computer software and business methods. Updates to this second edition reflect on the dramatic changes that have taken place in the US Patent System since the first edition, including the American Invents Act that has introduced the first-inventor-to-file policy and post-issuance proceedings to challenge validity. Current topics such as the Unified Patent Court, patent litigation updates reform in the US, design patents and patent inventions in medical science are also addressed.

Providing a strong scholarly foundation, as well as useful tips for practitioners to protect their intellectual assets in technologies effectively in the global market, this Research Handbook will be of great interest to legal scholars and students, as well as lawyers and patent attorneys.

Critical Acclaim
‘The second edition brings the marvelous first edition up to date and adds a number of new and useful chapters. It is essential reading for student and practitioners of comparative patent law. Moreover, its comparative focus is illuminating for those who specialize in a single country's patent law by providing an enlarged perspective.’
– Martin J. Adelman, George Washington University Law School, US

3. Patents and policies for innovations and entrepreneurship
Ove Granstrand

PART II EXAMINATION PROCEDURE
4. Trilateral cooperation – mutual exploitation of search and examination results among patent offices – has been evolving into Global Cooperation as in the case of IP5 Offices
Shinjiro Ono

7. A comparative approach to the inventive step
Amy L. Landers

PART III PATENT ENFORCEMENT
9. Claim construction under U.S. and German patent acts: wording used in the claims and the invention disclosed in the specification
Toshiko Takenaka and Christof Karl

10. The scope of patent protection for spare parts and its extension through other tools of intellectual property
Horst Peter Götting and Sven Hetmank

12. The theory and practice of patent damages in Japan and the U.S. – explaining the differences that remain
Christoph Rademacher