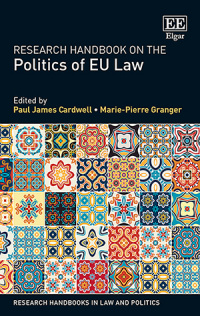 Research Handbook on the Politics of EU Law

More Information
Critical Acclaim
Contributors
Contents
More Information
Offering a wealth of thought-provoking insights, this topical Research Handbook analyses the interplay between the law and politics of the EU and examines the role of law and legal actors in European integration.

Expert contributors from international and interdisciplinary backgrounds set the politics of EU law in both a historical and contemporary context, exploring the relations between different EU institutions across a variety of substantive policy areas. Identifying the main sites of interaction between law and politics, chapters highlight key theoretical insights providing an in-depth understanding of the field. With up-to-date coverage of the latest developments, this Research Handbook analyses the impact of Brexit, economic and financial crises, migration crises and important trends for law and governance.

Discerning and forward-thinking, this Research Handbook will be key reading for students and scholars of European law, European politics, and those with an interest in exploring the interface between the two. Its accessible approach will also engage practitioners in EU law and politics, including lawyers and national government and EU institution officials.
Critical Acclaim
‘Situated in the “law in context” scholarship, the interdisciplinary contributors to this important volume analyse inter-institutional conflict as well as major policy fields. Next to “usual suspects”, like non-discrimination law, there are contributions on more rarely treated topics, such as the common agricultural policy, and company law. The 20 chapters significantly advance our knowledge on the politics of EU law and underline the central position that the European Court of Justice can assume in the politics and policymaking of the EU.’
– Susanne K. Schmidt, University of Bremen, Germany

Chapter 3: The Politics of the Court of Justice of the European Union
Fabien Terpan and Sabine Saurugger

Chapter 4: Litigation as a means to solve conflicts between the European Parliament and the Council: one size does not fit all
María-Luisa Sánchez-Barrueco

Chapter 6: The Law and Politics of Direct Democracy in the EU
Fernando Mendez and Mario Mendez

Chapter 7: The Law and Politics of Exit from the EU
Nieves Pérez-Solórzano Borragán and Stijn Smismans

Chapter 11: Everyone is equal, but some more than others: Judicial governance of EU antidiscrimination law
Amalie Frese

Chapter 17: The Politics of EU Law and the Area of Freedom, Security and Justice
Ester Herlin-Karnell