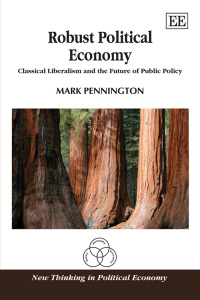 More Information
Critical Acclaim
Contents
More Information
This important book offers a comprehensive defence of classical liberalism against contemporary challenges. It sets out an analytical framework of ‘robust political economy’ that explores the economic and political problems that arise from the phenomena of imperfect knowledge and imperfect incentives.

Using this framework, the book defends the classical liberal focus on markets and the minimal state from the critiques presented by ‘market failure’ economics and communitarian and egalitarian variants of political theory. Mark Pennington expertly applies the lessons learned from responding to these challenges in the context of contemporary discussions surrounding the welfare state, international development, and environmental protection.

Written in an accessible style, this authoritative book would be useful for both undergraduate and graduate students of political economy and public policy as a standard reference work for classical liberal analysis and a defence of its normative prescriptions. The book’s distinctive approach will ensure that academic practitioners of economics and political science, political theory and public policy will also find its controversial conclusions insightful.
Critical Acclaim
‘Pennington provides a very useful guide, I’m tempted to say almost an algorithm, to anyone interested in pursuing institutional analysis in a simple and, yet, deep fashion’.
– Vlad Tarko, Review of Austrian Economics

‘Pennington’s book is brilliant, and his subtle dissection of the arguments of the leading critics of the market economy and classical liberal political economy/philosophy is highly recommended to the readers of Public Choice. . . I consider the book of the most important contributions published in recent years at the intersection of the disciplines of philosophy, politics, and economics.’
– Peter J. Boettke, Public Choice

‘. . . this book nicely synthesises a wide range of arguments and insights into a powerful and systematic analytical framework. Pennington provides a strong case to the effect that classical liberal institutions satisfy the criterion of robustness in that they successfully deal with the problems resulting from imperfect information and limited benevolence. He deftly defends the classical liberal approach against prominent and forceful criticisms, and skilfully applies it to some of the most difficult and pressing problems in public policy.’
– Ralf M. Bader, Economic Affairs

‘Mark Pennington presents a wide ranging and imaginative treatment of the superiority of classical liberalism over the various state-centered ideologies that presently enjoy wide currency. Among other things, we learn why people who are concerned with inequality and social solidarity should embrace the minimal state of classical liberalism and reject today’s total states with their unlimited domains. I was delighted to have been able to read this book as I learned much from it, and I am confident other readers will have the same experience.’
– Richard E. Wagner, George Mason University, US

‘I really enjoyed reading Mark Pennington’s book. Really, really enjoyed it. He nicely blends public choice and Austrian insights, the notion of robust political economy as something that takes into account self-interest, knowledge, and incentives. Pennington expertly highlights the comparative institutional arrangements and the plurality of choices that a system with several property and exit possibilities provides. Uniquely, he discusses how neither straight neoclassical economics nor the Stiglitz variety gets it. This is an important book because it attempts to address the critics directly. It is a book almost custom-made for those who want to defend classical liberalism against the common arguments.’
– Bruce J. Caldwell, Duke University, US
Contents
Contents: 1. Introduction: Classical Liberalism and Robust Political Economy Part I: Challenges to Classical Liberalism 2. Market Failures ‘Old’ and ‘New’: The Challenge of Neo-Classical Economics 3. Exit, Voice and Communicative Rationality: The Challenge of Communitarianism I 4. Exit, Trust and Social Capital: The Challenge of Communitarianism II 5. Equality and Social Justice: The Challenge of Egalitarianism Part II: Classical Liberalism and the Future of Public Policy 6. Poverty Relief and Public Services: Welfare State or Minimal State? 7. Institutions and International Development: Global Governance or the Minimal State? 8. Environmental Protection: Green Leviathan or the Minimal State? 9. Conclusion References Index
Add to Wish List
eBook for individuals
978 1 84980 905 4
From $40.80
Click here for options
eBook for library purchase
978 1 84980 905 4
View sample chapter and check access on: