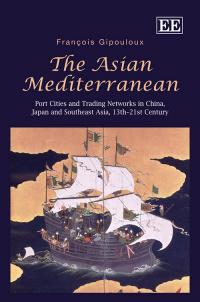 More Information
Critical Acclaim
Contents
More Information
This insightful book draws upon a wide range of disciplines – political economy, geography and international relations – to examine how Asia has returned to its central position in the world economy.

Discussing the strong link between history and contemporary economic situation, The Asian Mediterranean will appeal to academics, including post-graduate students of economics, geography, history, regional studies and Asian studies.
Critical Acclaim
‘Gipouloux’s narrative is clear and accessible, and his conclusions are innovative and insightful. This short review can barely scratch the surface of this impressively sophisticated study.’
– S.C. Levi, Choice

‘Gipouloux’s ground-breaking study based on a long career as a scholar of Asia’s past is a most original contribution to the study of globalization. Connecting past and present, the author has further developed the somewhat vague metaphor of an Asian Mediterranean into a well-defined concept that can also be applied to analyzing contemporary affairs. While in the past the traditional Chinese and Japanese state systems were failing to formulate adequate answers, on a more informal level the port cities were able to meet with the maritime challenges of the emerging modern world system. The author convincingly shows how also in the age of globalization, a string of coastal metropolises continues to be instrumental in opening up the Far Eastern economy to the global economy.’
– Leonard Blusse, Leiden University, The Netherlands
Contents
Contents: Preface Introduction: The ‘Mediterraneans’ of Europe and Asia Part I: Two Models of Expansion Without Borders: The European Mediterraneans 1. The Mediterraneans and Global Expansion 2. Long Distance Trade and Urban Sovereignty: The Competitive Model of the Mediterranean at the Time of the Repubbliche Marinare 3. The Hanseatic League: A Model of Cooperation on the Baltic Sea Part II: Early Outlines of an Asian Mediterranean: The Predominance of Tributary Trade 4. Asian Trading Kingdoms and Independent Urban Entities: From the 7th to the 17th Century 5. The Organisation of Trade in Asia: The Weight of Government Monopolies 6. Tributary Trade and Unofficial Trade 7. Japan’s Place in Intra-Asian Trade: Resisting Chinese Hegemony 8. The Asian Maritime System Part III: The Overlapping of Western and Asian Trading Networks 9. European Expansion or Asian Force of Attraction? 10. Forced Openings and Treaty Ports 11. The Cosmopolitanism of Asian Trade Networks Part IV: The Arena of Re-globalisation: The Second Birth of the Asian Mediterranean 12. Chinese Coastal Cities Confronting the Challenge of Globalisation 13. The East Asian Manufacturing Belt 14. Hong Kong versus Shanghai: Rivalry between Middlemen 15. Competition between Logistic Hubs in Asia 16. Hong Kong, Shanghai, or Peking: Where Will China’s International Financial Centre be Located? Part V: The Asian Mediterranean and the Challenges to State Sovereignty 17. Transnational Regions and the East Asian Economic Corridor: An Asian Mediterranean 18. The Asian Mediterranean and the Reshaping of China’s Economic Space 19. Local Protectionism and Trade Wars: Market Fragmentation in China 20. China’s Power Base Shifts Back Towards the Sea Conclusion Bibliography Index
Add to Wish List
eBook for individuals
978 0 85793 427 7
From $40.00
Click here for options
eBook for library purchase
978 0 85793 427 7
View sample chapter and check access on: